Gov. Darius and His Flying Monkeys

Flying monkeys is a term used in psychology in the context of narcissism. For example, someone who’s a model of pathetic treatment under a narcissistic leader, but he or she is still sitting in the basement of the narcissist, and in a circumstance that hasn’t changed their perception of him. A person who is completely lacking self-awareness and a victim of blind loyalty.

Psychologically, a narcissist is a master at getting sympathy from his crimes by playing the victim. And those who come to his defense and attack his victims must have been fooled by the narcissist into thinking the narcissist is the true victim. These people are called flying monkeys or wizard of Oz in the theory of narcissism.

Interestingly, a symptom of narcissism has been noticeably present from Gov. Ishaku’s administration and the manner he governs Taraba State. The Governor started his administration using a mantra described as Rescue Mission thus branded himself the Rescue Captain.

Nearly 5years of political leadership in Taraba State, it is difficult for the people of the state to point a finger at the development strides under the Rescue Mission and despite the state hitting a debt profile of 146billion naira loan facilities since 2015. Apart from the bailout fund and several tranches of Paris Refund that ran into billions of naira. And if one also considered the budget support fund provided to states by the Federal Government at a time.

The danger of Taraba politics will be greatly magnified by Gov. Ishaku’s likely political failure. He came into power based on power shift arrangement and supported by TY Danjuma. He raised the expectations of people in a manner he has left much to be desired. There’s little or no economic blueprint by his administration to put Taraba on Nigeria’s Economic Development index.

Today, it will beat the imagination of many people in Taraba as to why the new minimum wage has not been implemented in Taraba. Several states in the North have implemented the new minimum in line with the approval of President Muhammadu Buhari and the National Assembly. It’s believed that the NLC Chairman, comrade Peter Gambo cannot challenge or disagree with Governor Ishaku’s refusal to approve and implement the 30 thousand naira new minimum wage due to the ethnic-religious based politics in Taraba State.

However, when it comes to understanding the problems of Taraba State and Ishaku’s failure, the closet measure to judge is the connectivity between narcissism and his flying monkeys. The Governor seems to have perfected the craft of using his flying monkeys who are now left to be seen in their attempt to repackage the image of the self-acclaimed Rescue Captain using propaganda and lying inventions.

Last week, the Governor’s official handle on Facebook issued a statement said “Some of our state frontlines health worker handling the index cases of COVID-19 pandemic.”

The statement further added, “They have our support and we wish them all through, together we can and together is easier, and with harsh tag RescueMission2.” The statement concluded. 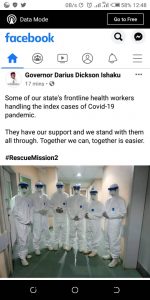 But a run through the internet may have signaled executive propaganda when it is discovered that the picture that was used as an attachment to Governor Ishaku’s statement on his official handle was a screenshot from Lagos State University Teaching Hospital on Twitter @LUTH. 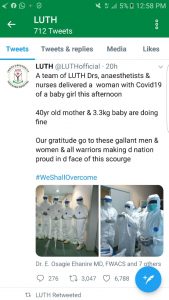 So far, Gov. Darius Ishaku has installed a 12 beds isolation center in the Jalingo Specialist Hospital, and without the deployment of health-protective equipment for COVID-19 frontlines health workers as the Governor was pictured during the inspection of the isolation center.

Put simply, Gov. Darius can be known for taking shelter in an intensified form of propaganda politics under his Rescue media team that worked so well for him and thereby transforming the entire state into a single machine for his gains.

Unless the people of Taraba realize the manner and ways the Governor and his media officials propagate non-existent achievements in Taraba. This is a ploy often predicated on siphoning the treasury in a blink of an eye. The political propaganda ripping the heart of Taraba must stop.

One Up For Vigilance – By Babafemi Ojudu

Farooq Kperogi: ‘I Used to Think “Bianca” and “Biafra” Were Igbo Words!’

Farooq Kperogi : Nigerian Corruption is Embedded in this Mangled Expression