A cat arrested for smuggling heroin has escaped from a Sri Lankan jail, according to police reports.

The cat was caught smuggling heroin and cell phone sim cards into a high security prison in Welikada when it was caught by prison guards. 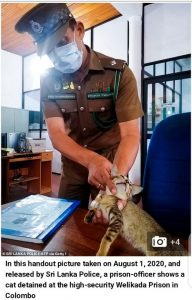 At the time of its capture, the feline had nearly two grams of heroin, two sim cards and a memory chip tied in a bag around its neck, according to prison officials.

See Also: Missing Sailors Found In Micronesia Thanks To SOS Written In Sand

Before the cat was caught, prison officials reported a high rate of people throwing small packets of drugs, cell phones and phone chargers over the prison walls in the last few weeks.

The cat was put in its own prison cell after capture but escaped without the knowledge of officials.

Sri Lanka is going through a major drug problem among its population fuelled by extreme poverty and corruption. Several anti-narcotics officers have also been indicted for selling banned drugs and substances to individuals and gangs.

COVID-19: My family members avoided me when I tested positive – Obasanjo