Combined forces from Thailand and Malaysia have apprehended a Nigerian syndicate that specializes in romance scams. They were said to have escaped arrest sometimes last year in Thailand and relocated to Kuala Lumpur to continue their deeds.

In a bid to nab them, the deputy director of Thailand’s Action Taskforce for Information Technology, rallied a squad and joined forces with Malaysian economic crime force. The two forces embarked on a search in seven different areas around Kuala Lumpur.

Meanwhile, back in Thailand, policemen equally went to other locations to dig out intel that could lead to the arrest of the fraudsters. 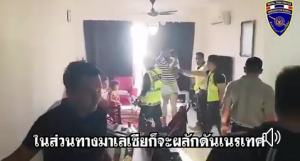 The Joint force subsequently nabbed seven male Nigerians in Kuala Lumpur. They have all been on the “wanted” list for crimes they had committed before eloping from Thailand. Equally, seven other female Thailand women were apprehended in the raid. Items such as cell phones and laptops were recovered from them, while text messages on their phones revealed they were just about to swindle another unsuspecting victim.

Police discovered that they were in the act of pretending to be white men looking for relationships and eventually asking their victims to pay an amount of money as the delivery charge of some gifts they had sent over. 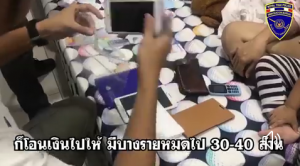 The Thailand taskforce boss stated, “TACTICS had come down hard on this gang, prompting the criminals to flee to Malaysia about a year ago. The gang set up their new base and resumed the romance scams.”

He also explained that the syndicate have illegally collected an amount nearing Bt100 million from their victims.