Is Beyonce Coming To A City Near You: R&B Diva Announces 2013 World Tour

A promotional poster for Beyonce’s next tour may have leaked online.

A photo of Beyonce with the tagline “The Mrs. Carter Show World Tour” leaked via Live Nation’s UK website sparking rumors that a new solo album and tour were in earshot for fans. The image was quickly removed after being posted.

Beyonce wed Shawn Carter aka Jay-Z to become Mrs. Carter in 2008. Photos of the “Crazy in Love” singer in the studio, even with her hubby, have been randomly popping up online over the past two months. She has been reportedly working with Timbaland, Pharrell Williams and Justin Timberlake on the follow-up to 2011’s 4, which reached No. 1.

The “Run the World (Girls)” singer will be at the center of this Sunday’s Super Bowl halftime show, where she is expected to perform her hits, as well as with the newly reunited Destiny’s Child. During a recent press conference about the event, Beyonce said she was expecting to hit the road “soon.” “I may have an announcement after the performance — fans should just stay tuned to see,” she said. 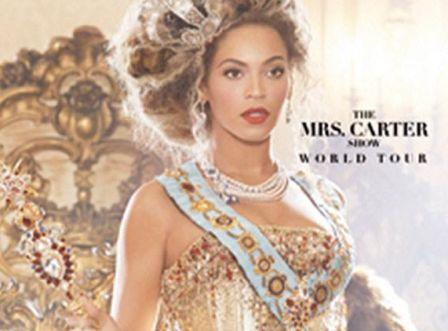 CAF Reveals Why Nigeria Did Not Get Broadcast Right