According to a fiery Facebook post on 13th March 2017, the pastor’s crime lies in the fact that he regularly describes Jesus Christ as God.

“I am filing a case to the Federal High Court of Nigeria against Pastor T.B. Joshua and co-pastors for speaking a lie against Jesus Christ by calling him God,” Sheikh Mabera began in a Facebook post which soon went viral.

Admitting that he regularly watched Joshua’s popular television channel Emmanuel TV, the Nigerian Islamist continued, “I was completely aghast when I heard the ‘so-called’ Prophet T.B. Joshua of Emmanuel TV calling Jesus God in the presence of thousands of his audience, among whom were professors, doctors, reverend fathers and mothers, pastors and bishops,”

He added that, from his own research, the Bible itself is replete with evidence contradicting the deification of Jesus Christ.
Sheikh Mabera, who has a school where he trains other Muslims in the art of defending their faith, continued by concluding T.B. Joshua and his ilk lack “proper understanding” of Scriptural truths.

“As I was watching T.B. Joshua speaking through Emmanuel TV and his audience helplessly watching and listening to his accumulated lies and unfounded praise-singing directed at Jesus, I almost cried with automatic alacrity when he said that Jesus is Almighty God. My conclusion was that both TB Joshua and other Christians actually read their Bible without proper understanding of what they are reading.”

The fiery Islamic advocate then quoted several Scriptures to support his claims that Jesus Christ was a “servant of God”, not God Himself.

“There are millions of facts from the Scriptures and other rational facts that authentically proved that Jesus does not have even the least qualification of being God,” he opined.

Mabera ended his post by declaring Joshua was “deceiving and misguiding” his “innocent followers” with “preposterous lies”.

“Let us meet in the court of law and debate it out. Enough is Enough,” the statement on Facebook ended.

According to information available online, Yusuf Mabera has debated several Christian clerics on various topics, regularly traversing the shores of Nigeria with his message. 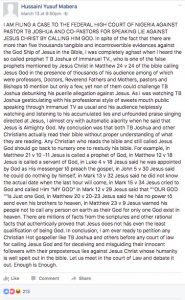