Jonathan did not sack me – Orubebe 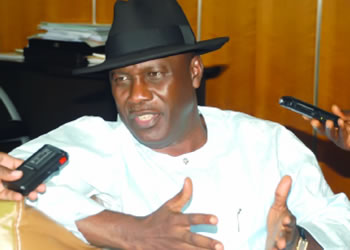 The immediate past Minister of the Niger Delta, Mr. Godsday Orubebe has responded to reports that he was sacked by President Goodluck Jonathan.

Speaking to newsmen at a handing over ceremony at the ministry yesterday, Orubebe said he was in fact not sacked but resigned in order to participate in politics.

Speaking on the experiences he had gathered in politics and civil service, Orubebe said, “I want to offload these to the services of my people because I don’t want to go just like that without giving back what God has given to me.”

He said that under his watch the ministry had initiated the construction of nine skills acquisition centers, adding that the one in Bayelsa would be commissioned by April and it would train youths in oil and gas and maritime activities.

He blamed the slow pace of work on the centers on diversion of funds to the East-West road.

2014 Elections: PDP, APGA, Labour walk out on Jega in Osogbo