The striker disclosed information on his health status on Sunday evening, October 18, after missing Crystal Palace’s 1-1 draw against Brighton and Hove Albion at Selhurst Park and says he has gone into self-isolation to treat himself.

Ayew recently returned to the club after going on international duty with Ghana in Turkey where he played in their international friendly fixtures against Qatar and Mali after making four appearances in the Premier League for his club this season.

The 29-year-old striker has disclosed he is asymptomatic to Covid-19 but he has commenced the self-isolation at home.

“Sadly, I have tested positive for Covid-19 and have begun my quarantine in line with the health guidance,” Ayew tweeted.

“Thankfully, I am feeling fine and I do not have any symptoms. I will be cheering the boys on from home and look forward to being back on the pitch soon.” 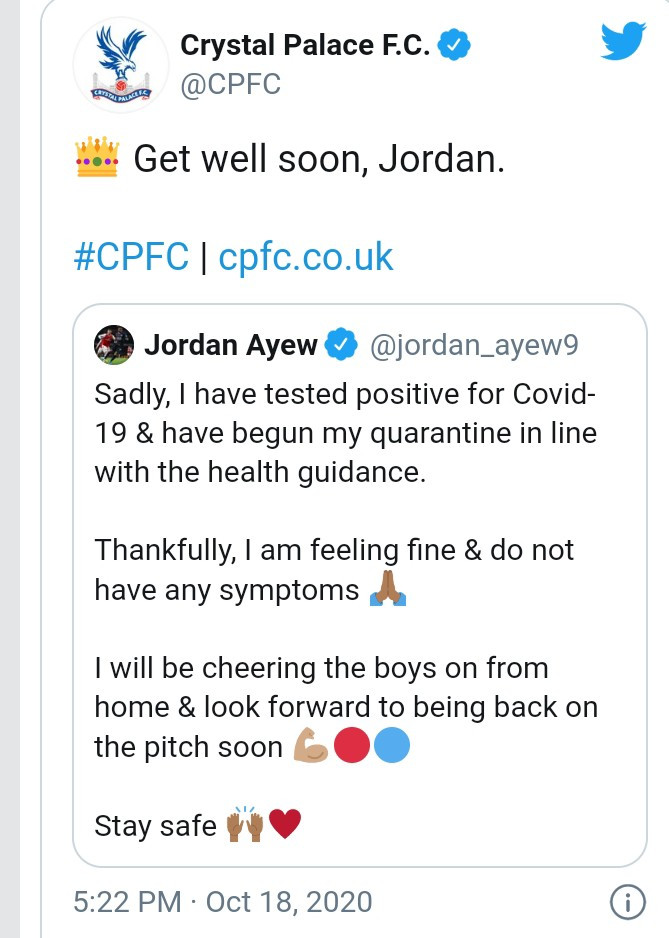 In similar news, last week, Portuguese superstar Cristiano Ronaldo tested positive to coronavirus when he was away on international duties during the UEFA Nations League. He will stay in isolation for 10 days after the test before featuring in Juve’s next fixture.

The 5-time Ballon D’or winner however had to depart from the Portuguese squad and traveled back to his home in Turin to complete his remaining days in quarantine. It remains uncertain if he will appear in Juve’s UEFA Champions League group stage match against Catalan Giants Barcelona, as he will need to stay out one week after quarantining before featuring in a match.

Italian Heath authorities have put in place strict guidelines to safe guard players and to mitigate the spread of the virus.