A young man has allegedly committed suicide after he couldn’t handle backlash from a false rape allegation on Twitter.

I have just confirmed my worst fears.
About some weeks back, a young bright and vibrant entrepreneur was dragged on here for abuse although not physical but someone felt the need to call him as an abuser and another called him out on here.

The young man identified as Izu, @Legend_Izu, had been falsely accused of rape by another twitter user, Nani @NaniChianese who said he sexually assaulted a mutual friend, Neko Chan @yattedneko.

The accusation had drawn the usual faux outrage on social media as tweeps called for Izu’s head despite repeated pleas for his side of the story to be heard. The fact that Nani was a close friend of Izu also did not help matters as she led the virtual mob that hounded and crucified the young man.

Someone was falsely accused of rape, his name added to a register of rapists on Twitter. He couldn't handle it and committed suicide.

The "accuser" has deleted account. The curator of rapist "register" locked account. I just hope the world is safer for women now. Say her name?

The painful part was that the curator of the list, Nani, was friends with the accused. She didn't even ask for his side, she just posted it. Even the girl that said she was raped later said the harassment wasn't physical, walahi both those girls are murderers!

During the outrage, one of his accusers compiled a ‘list’ of rapists on Twitter and included Izu in it. This allegedly affected his business and source of livelihood as a fashion designer and creative director as he was labelled a rapist.

Izu did tell his side of the story absolving himself of the false rape allegations. At the time, he released screenshots of conversations between himself and the alleged victim which clearly showed that no act of rape occurred between the duo. In fact, it turned out that @yattedneko only accused Izu of rape because he rejected her advances to initiate a relationship. 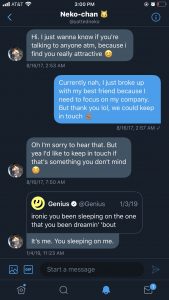 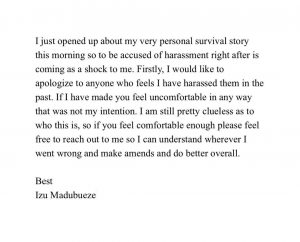 Despite the evidences however, the curator of the ‘Rapist List’ refused to remove Izu from the list.

Izu committed suicide due to the emotional stress from the accusation, leaving a suicide note of sorts on his Twitter handle. He was vibrant young entrepreneur who became a victim of the court of public opinion and trial by social media. 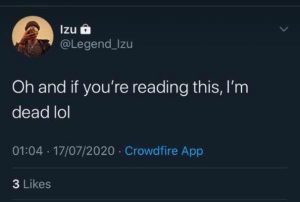 Nigerians have reacted by calling on the false accuser as well as the curator of the Rapist list to be arrested and prosecuted for murder.

#Justiceforizu needs to trend. I am tired of people hurting other people. When the victim is a guy, people tend to look the other way. Such a young man with a promising future gone. We call for nothing else but justice😑😪

The painful part was that the curator of the list, Nani, was friends with the accused. She didn't even ask for his side, she just posted it. Even the girl that said she was raped later said the harassment wasn't physical, walahi both those girls are murderers!

People should just start thinking for themselves. This herd mentality thing is so disappointing. One person says something and other sheeps pick it up and run with it. They hide under this cover of "feminism" to put people's lives in danger.

Be your own chef with this tasty Sharwama recipe

Students declared fatwa, killed my son in mosque where Pantami was Imam – Prof