JUST IN: Keyamo loses Driver to #EndSWAT protest in Abuja

Festus Keyamo, Minister of State, Labour and Employment has announced the passing away of his driver who died during #EndSWAT protest in Abuja.

Nigerians who revolted against the police brutality, embarked on a week long protest to express their grievances against the Buhari-led administration. The protest took place across different states of the nation.

However, the protest in Abuja turned violent on Wednesday after a group of hoodlums vandalized cars of protesters, smashing the windscreens and windows of cars parked along the street.

Some of the hoodlums trying to hurt the protesters with long sticks were caught and beaten to a pulp. The protesters took them to a hospital for treatment after informing the authorities.

Unfortunately, a life was lost in the mayhem caused by these hoodlums. The driver of Minister Keyamo lost his life in an intentional hit and run accident, Keyamo claimed.

I regret to announce that my driver, Mr. Yohanna Shankuk, died yesterday in Abuja as a result of the protests.

A vehicle that saw advancing protesters at Berger roundabout, made a U-turn, took the one-way back and ran over him as he was making his way on foot to my private office 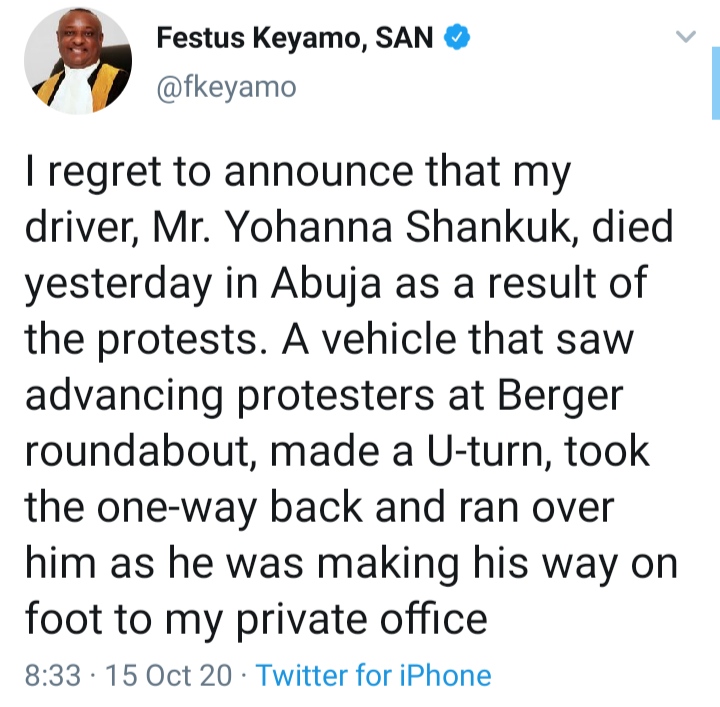 We need a plan B – Protesters re-strategize following curfew in Lagos, Edo…