A lookalike of Kim Jong Un who made a preposterous appearance on Wednesday has been arrested by police, after dancing in front of North Korea’s female cheerleading team before being hauled off by police at the Pyeongchang Olympic stadium.

The Kim lookalike, wore thick-rimmed glasses and dressed in all black, spectators were in an uproar when he waved at the famed “army of beauties” at an ice hockey game between the joint Korea team and Japan.

Many of the cheerleaders giggled nervously and waved back, until the counterfeit Kim broke into an impromptu jig and the stadium went ballistic.

He was tackled within seconds by three buff security goons, thought to be North Korean, before being frog-marched  to a room inside the arena, watched by stunned onlookers.

“I walked past the cheerleaders and waved but then three rough-looking guys, not in uniform who I suspect were North Koreans, came out of nowhere and grabbed me by the arm,” the Kim double, who goes by the stage name Howard X, told AFP.

“When I waved the unified Korean flag at them they got really pissed off and started kicking me in the shins.”

After  a shouting match with the North Korean bouncers, the Kim impersonator highlighted the fact that he could not be arrested simply for looking like North Korea’s leader.

“If you don’t like my face there’s nothing you can do about it  I was born this way,” he protested.

However, Games security did not look to favourable on his argument and he was taken away by police officers.

“They didn’t arrest me, I was detained,” the Kim impersonator said.

“I didn’t break any law. It took them a while to get a translator but they said it was for my own safety because some conservative people (in the venue) didn’t appreciate my presence.”

This was not the first spectacle by “Kim” he also caused a debacle at last Friday’s opening ceremony in Pyongyang.

When he and a Donald Trump lookalike sauntered nonchalantly past an accredited media section in an attempt to get nearer to the athletes, including two Koreans, who marched behind the blue-and-white unification flag.

However they were unable to gain entry to the VIP area, where American Vice President Mike Pence and the real Kim’s sister Kim Yo Jong were in attendance.

Trump substitute Dennis Alan was not present at the hockey but “will be back soon”, according to buddy Howard.

“This situation is totally messed up,” he complained. “All I did was wave the flag. Everybody else was waving the flag. Long live democracy!” 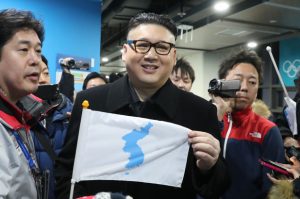