After paying to lodge in a hotel room, a young lady and her boyfriend went ahead to steal properties such as a Television set, shower towel, umbrella, and a key from their room.

Reports revealed that the couple had been staying in the hotel for about a week and had carried out the act under the guise that they would be retaining the room for more days.

Thinking they would still be in the hotel for a longer, period, the young lady who has been identified as Laurenta, successfully moved the slightly big Plasma TV by using a luggage sack commonly called “Ghana must go”. 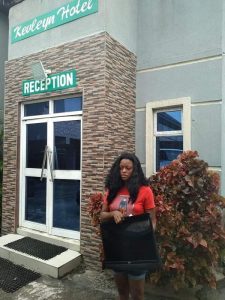 On his end, Laurenta’s boyfriend moved a towel, a key, and an umbrella from their room and eloped after claiming that he was going out to purchase something.

But their luck ran out after security officials and staff of the hotel traced Laurenta to her sister’s house. There, they learned that the young lady had at a time, stolen the sum of N800,000 form another man who had slept with her.

Laurenta subsequently confessed to having stolen the TV set after she was dragged to the hotel, explaining that she had used the TV in securing a loan of N5000.