Officers attached to the Special Taskforce on Environmental Sanitation and Special Offences intercepted a truck filled with 43 northerners and 48 motorcycles, on Friday, August 30, 2019.

The interception is said to have occurred around the Agege area of Lagos State after some concerned residents informed the Sanitation team. They reportedly exhibited some habits that got them worried, prompting them to lodge a report with the officials.

Speaking to newsmen after detaining the occupants of the truck, the Chairman of the Taskforce team, Yinka Egbeyemi, explained that they had been moved to Oshodi in the bid to understand their original motives. 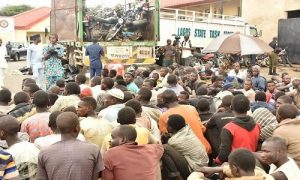 He also mentioned that his team carried out a search on them but found nothing incriminating. “

“While my team was on operation, we got information from the public that some people had entered into Lagos in a trailer loaded with over 300 people. We swiftly responded to the alert and trailed the truck from Berger area to Agege. We eventually intercepted the truck which carried no few than 123 men and 48 motorcycles.

“We have interrogated most of the truck’s occupants; from the information we gathered, some of them said they were coming from Jigawa State, with 48 of them claiming to own seized motorcycles. The rest of them said they came to Lagos in search of greener pasture,”  Yinka said.

During initial interrogation, one of the 123 individuals, explained that he had traveled to Lagos so as to earn a living and take care of his family by riding a motorcycle.  He then added that before traveling down to the state, he paid a rent of N7000 for his accommodation to an individual in the Isolo area.

Also, read: Jonathan and his former aide, Dufada are both criminals – says EFCC

How thugs attacked me after visiting Ekiti Assembly – Fayose

Woman dies from abortion after cheating on her husband

Kaduna: My govt spent N16bn on security in 5 years – El-Rufai