Special Adviser to the President on Media & Publicity, Femi Adesina stated this in a statement.

According to the statement, the project with an investment in excess of $1.5 billion is a Joint Venture between the Federal Government of Nigeria through the Nigerian Ports Authority, Lagos State Government, the Tolarams Group (the owner of the Lagos Free Zone), and China Harbour Engineering Company.

In Lagos, the President also inaugurated the Imota Rice Mill, conceptualised and completed by Governor Babajide Sanwo-Olu of Lagos State as well as the Bestaf Lubricant at MRS Holdings Company Limited.

The 200m litre lubricant plant, which covers the whole value chain of lubricants, is the first of its kind in West Africa.

On Tuesday, the President will inaugurate the historic first Phase of the Blue Line of the Lagos Rail Mass Transit in Marina and the John Randle Centre for Yoruba Culture and History at Onikan roundabout.

At the commissioning of the Lekki Deep Sea Port, the President led Governor Babajide Sanwo-Olu of Lagos State, the Minister of Transportation, Muazu Sambo, the Chinese Ambassador to Nigeria, Ciu Jianchun, top government officials and traditional rulers, to witness the overloading from the Container Ship, sailing under the flag of Malta. 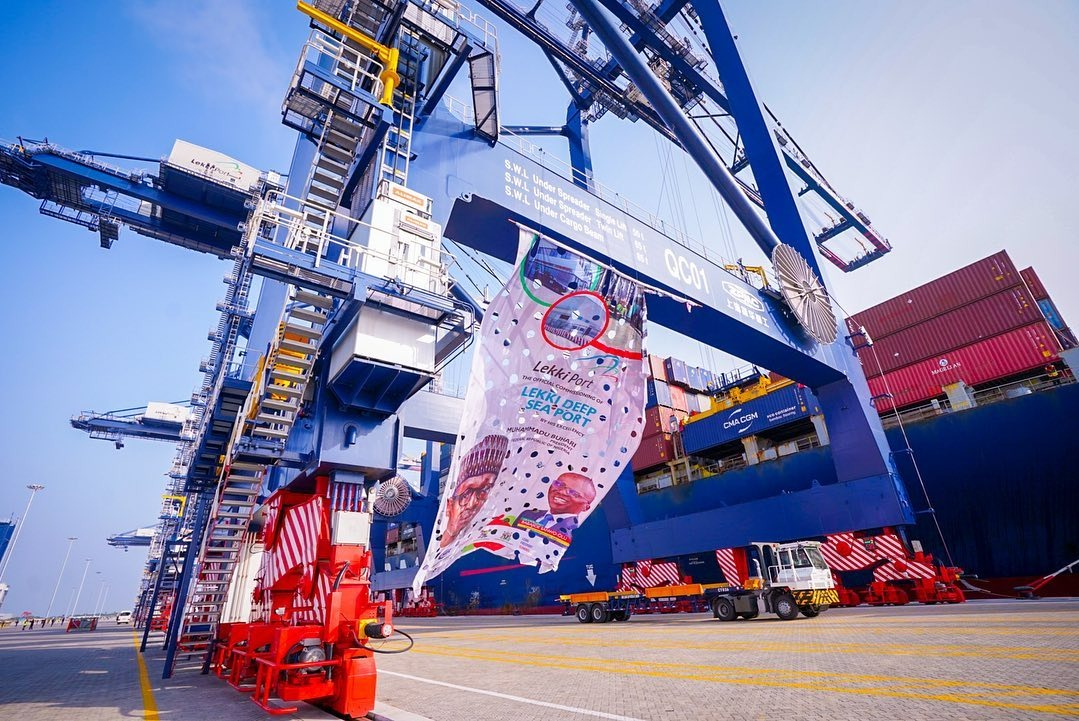 ”We are excited that in your own time, something fresh has been birthed in this country and it is going to generate thousands of direct and indirect jobs.”

The Minister of Transportation, Mu’azu Sambo, noted that the commissioning of the project was made possible by the expedited manner the President handled all requests made by the Federal Ministry of Transportation concerning Lekki Deep Seaport.

”The very fact that the letter of intent between the proponents of Lekki Deep Seaport and its financial partners was signed as recently as April 2019 and by January 2023 the wide-ranging impact project is already being commissioned is a testament to the tenacity of purpose of the Federal Ministry of Transportation through the Nigerian Ports Authority.”

He thanked the President for approving the Ministry’s extraordinary request to designate Lekki Deep Seaport as Customs Port and approved Wharf and its publication in the Federal Government Official Gazette in record time.

”With Seaports being under the exclusive legislative list, the Nigerian Ports Authority’s provision of a sinking fund for Lekki Deep Seaport Federal Government’s equity contribution gave this project the necessary statutory cover and financial guarantee in line with the law.

”Completing a project of the magnitude and impact of a deep seaport in a record time of 45 months shows the effectiveness of tenacious ministerial supervision, strict regulatory oversight and strong presidential backing,” the minister said.

Sambo, who described the project as one of the major legacies of this administration, added that over 170,000 jobs would be created as operations commence.

The Chinese Ambassador to Nigeria, in his goodwill message, said the landmark gateway project jointly built by five parties from four countries is a fitting example of a good business model.0o

”This project is a joint venture between China, Nigeria and Singapore, and is run by a French company. The model of ‘five parties from four countries’ is a way of taking advantage of the wisdom and strength of all parties.”

He pledged that China would promote this business model to pursue the Win-Win outcome, particularly to the growth, development and progress of Nigeria.

Using the analogy of three initial ‘E words’, the Ambassador said the project is Engine of the Economy, Equity of Investment and Example of Model Business.

On Engine of Economy, Jianchun explained that the Port is the number one deep sea port in West Africa and one of the most modern and efficient ports in sub-Saharan Africa.

”It is estimated that the overall economic benefits will reach more than 360 billion USD, becoming a new engine of economic development that will empower the southwest region and the whole country.”

As an equity investment, the Ambassador described the port as a valuable practice for Chinese companies to move from the role of Engineering, Procurement and Construction (EPC) contractor to a strategic investor in building major infrastructure projects in Nigeria.

”The government doesn’t need to worry about the existence of guarantees or debt risks. It also shows that the investment climate in Nigeria can be trusted. We have every reason to be confident in Nigeria’s future development,” the ambassador said.

The Managing Director, Nigeria Export Processing Zones Authority (NEPZA), Prof. Adesoji Adesugba, recalled when the construction of the port began in June 2020, with the flag-off by President Buhari.

He said that very few Nigerians believed that it would become a reality, especially with the challenges of COVID-19 ravaging the country and the entire world at that period.

”Therefore, we should all be proud as Nigerians that this has not only become a reality, but a Free Zone has built and completed the largest sea port within four years which will reposition Nigeria as a regional hub globally for maritime business,” he said.

Adesugba pledged that NEPZA would continue to give Lagos Free Zone, and indeed, all free zones licensed under it, the institutional support required to sustain this project and all other projects being conceptualized in the free zones.

”We are ready to lead in partnering with agencies at National and Sub-National levels, and the private sector to provide the needed support for this investment to thrive.

”Particularly, we will partner with the Nigeria Custom Service to perform its role effectively in order to achieve the objective of making this project stand as a testament to the legacy of President Muhammadu Buhari.

”We must not allow the momentum generated by the commissioning today to wane. All hands must be on deck to sustain this reality, ” the head of Nigeria’s free zone regulatory authority said.

At the Bestaf Lubricant plant owned by Sayyu Dantata, the founder and CEO of MRS Holdings Limited said the plant, which has the capacity of producing 1,700 different products, will contribute to foreign exchange generation for the country, through products export, as well as meet the needs of other neighbouring countries.