One of the police officers stationed at Omu-Aran area in Kwara has been stabbed to death by a man suspected to be insane.

Although he was not the only one at the station during the attack, it appeared like the man had specifically gone in to attack, the deceased, Sergeant Abu.

Reports have it that the mentally unstable man just walked into the police station, armed with a cutlass and other harmful tools.

He immediately began to hit the officer with the cutlass, and when others tried to intervene, he took to his heels.

The injured officer was taken to a hospital afterwards. But after making efforts to save his life at two different hospitals, he eventually gave up the ghost. 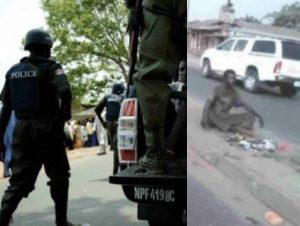 While narrating the incident, one of those who witnessed the scary moments of the attack said, “I was on my motorcycle when I saw the fleeing man holding a cutlass and a wood. He was wearing a red attire and we followed him. Later, some other motorcyclists joined in the chase and on getting to Taiwo Area, he stopped, dropped his weapons and raised up his hands. It was in the process that he was arrested by the police and moved to the station.”

The Police Public Relations Officer of the command, Ajayi Okasanmi, has since reacted to the attack. He mentioned that the case was under investigation.