A hapless man was run over by a speeding BRT bus yesterday (Thursday) The bus hit the man as he was trying to cross the BRT lane to the dismay and horror of several spectators. The incident happened at Irawo Bus stop, Ikorodu Road, Kosofe Local Government Area, Lagos.

The Nation gathered that after being knocked down by the BRT vehicle at 12:10 p.m the vehicle, with its passengers, sped off after a mob gathered.

The accident occurred less than 50 metres away from the Irawo pedestrian bridge.

His corpse was put in the back of a truck by onlookers and taken away after lying on the road till 12:42 p.m.

An eyewitness said the man erroneously took the double lane road, which is used exclusively by the Primero buses, for a one way road.

Another resident of the area, who gave his name as wale, describes the scene as he was only a few metres from the sad incident

“I live in the neighbourhood. I was standing at the Irawo bus-stop layby when the accident happened. The guy was trying to cross the road, unfortunately, the BRT was speeding. Immediately it hit the guy, the guy fell and rolled under the BRT and was crushed. That was how we discovered that he was dead.

We picked up his phone and tried to call his parents or family but just one person responded. We couldn’t gain access to his phone because it had a password. So, we removed the sim card and put it in another phone. The guy didn’t look properly before crossing and actually, there is a bridge just nearby. This place is not meant for crossing.”

Officers of the Lagos State Neighbourhood Safety Corps (LNSC) and the police, arrived at the accident scene and helped in crowd control.

Although they refused to answer any questions, an LNSC official told The Nation that he learnt the man died after falling off a commercial motorcycle (Okada). But this was disputed by those at the scene.

Another witness, who did not disclose his name, said: “I just hear noise ‘gba!’ When I look like this, na so I see BRT pass. Na so dem say man don die o. There was no Okada passing by then. It was only that BRT.”

The accident caused a build- up of traffic on both sides of Ikorodu Road.

(DPO), E. Bernard the Owode-Onirin Divisional Police Officer, approached the mob and persuaded them to allow the vehicles to pass.

The remains of the victim has been deposited at the morgue. 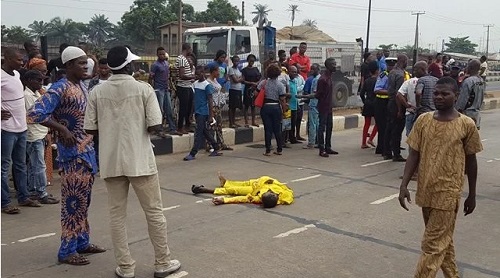 Shekau Dressed as a Woman to Escape Sambisa- Army