The pair, who became engaged in January after a whirlwind romance of less than a year, have split up due to Mariah’s excess spending

According to Australian Magazine, Woman’s Day, a close source to the family confirmed that Packer ended the relationship over Mariah’s ‘extravagant spending’ as well as a fall out over her new reality TV show, Mariah’s World. 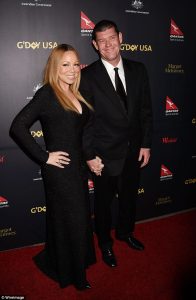 It was also gathered that the couple came to blows after Mariah “refused” to attend James’ sister, Gretel’s 50th birthday party in Sydney, The Sun reports.

”When she refused to come to Australia for Gretel’s birthday party it created a lot of tension in the family. His mum hated to even hear her name mentioned, and James’ tight circle of friends never really thought they would marry,” the source added.

Women’s Day magazine claims that the tycoon has allowed her to keep her $10million diamond engagement ring.

The news comes after Mariah announced the cancellation of most of her South American tour, earlier this week.

Mariah has four-year old twins, Monroe and Moroccan with ex-husband, Nick Cannon who she was married to from 2008 to 2014.