An infant of about 10 months was recently rescued after her mother dug a shallow grave and buried her in it, inside a bush in Ghana.

The incident occurred at Krobo-akye around the Central region of the country. But for the residents’ vigilance, the child would have died from suffocation.

Reports from a Ghanaian news agency, Adiom News, revealed that the residents heard the baby crying profusely and had to trace the sound to the location where the crying came from.

When they got there, they discovered that the baby had been kept inside a shallow grave in the bush and left there to die. 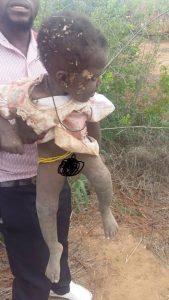 According to a resident, Yaa Grace, Police officers were quickly alerted and called to the scene where the baby was found.

The little girl was then moved to a medical center for prompt tests and treatment.

Senya Breku District Police Commander, Mathew Boamponsem, explained that the baby had become dehydrated when she was found as she had been crying for long periods.

He further assured that officers had been assigned to fish out the mother of the girl.

After initial assessments, the medical doctor who manages the operations of the Senya Breku Health Center, Victor Saidu, revealed that the child was in a critical condition and her private part had been infected with bacteria as a result of the time she spent inside the grave.