Manchester United Manager, Jose Mourinho has stated that Liverpool were lucky to have scored through deflected goals. Although, Sadio Mane was quite excited that his team came out victorious.

While addressing the newsmen, Mane explained, “We’re very happy. We played great football today. We created many chances. We deserved to win.”

“We are Liverpool. We never give up. We always try to pay as a team. Everyone was more focused than ever. We pushed harder than ever.”

Sane progressed, “Gives us motivation. The confidence is here. We’re going to try to be ready for the next game.

In his address, he said, “Definitely. We had the bigger chances. They were pretty dangerous on the break., especially in the first half, we were going a lot through the middle.

“We were expecting something else, we were prepared. We know all about their strengths. We were ready for the fight. “

Xherdan Shaqiri who came on to score a brace for the hosts also said, “I was looking forward to the game There were a lot of opportunities when I came on.”

In response to how he felt about coming on as a substitute, Shaqiri was quick to rule out the feeling of frustration as is regularly seen among players who naturally want to be in a starting line up.

“Only 11 players can play. We have to stay in the game also, who are outside, to try to help the team. When you achieve something, the whole team achieves something.” 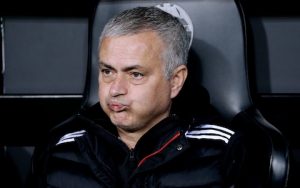 After the match, Jose Mourinho confessed that his team was not up to par against Liverpool. He stated, “They attack much more than us. They had more corners. The moment we conceded (the second and third goals), it was two easy goals for him.”

Mourinho insisted that Liverpool were fortunate to score two goals through deflections. He mentioned, “If you want to talk about fortunate, talk about their second and third goals.”

He went on to say that his side’s chances of clinching the title are now slim.

Mourinho said, “We can still finish fourth. It’s not easy. We are going to finish in the top six like all the other historically top teams. The best we can get is the fourth. We need to look for fifth.”