Former US Presidential Aspirant, Hillary Clinton has called on President Buhari to stop wanton killings of peaceful protesters in Nigeria.

Nigerian youths in the past 12 days have embarked on peaceful protests to express their grievances against unchecked police brutality in the country.

They coined #EndSARS and #EndSWAT hashtags on social media to create more awareness and draw the attention of international media to the extra-judicial killings of innocent citizens.

The defunct Federal Special Anti-Robbery Squad (SARS), a unit of Nigeria Police Force is known for brutalizing and extorting citizens.

Nigerians demanded that the unit be scrapped while the entire police force be reformed.

The protests in recent days have been hijacked by hoodlums allegedly sponsored by politicians to unleash mayhem on protesters.

The violence on Tuesday degenerated as some thugs reportedly set ablaze a police station in Orile Iganmu area of Lagos state.

This caused Governor Babajide Sanwo-olu to impose a 24-hour curfew on residents.

However, peaceful protesters demonstrated civil disobedience by  protesting at Lekki Toll gate despite the curfew.

Military officers launched an attack on the erring protesters by opening live ammunition on them.

Lekki toll gate known as the hub of the elite with modern day infrastructure and stable electricity suddenly went dark as all security lights were turned off during the gunfire.

Reacting to the incident, Hillary Clinton in a tweet wrote; 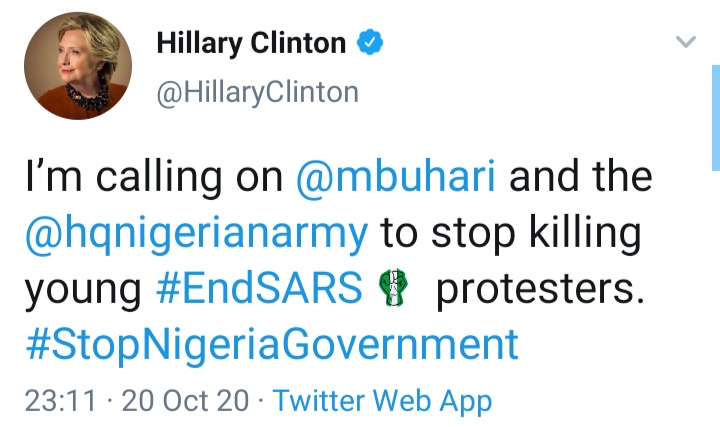 Clinton’s tweet has attracted reactions from both Americans and Nigerians who shared their thoughts on the violation of human rights in a democratic government.

They removed the cameras 2 hours before,turned off the street light and the led billboard and deployed soldiers to open fire at the crowd singing the national anthem…they brought tanks!! Over 78 people are dead

Thanks this means a lot to us. we have an incompetent leader that cant properly talk, talk more of handling a nation #BuhariResignNow

We also need the @IntlCrimCourt to try @MBuhari, @jidesanwoolu and @HQNigerianArmy for crimes against humanity.

That’ll have to wait till end of his tenure

The International Criminal Court is not hindered by the immunity clause of member states. ICC has an overriding jurisdiction to try offenders even though they are backed by their domestic immunity clause. ICC can try a sitting President.

The former Sudanese President Omar Al Bashir was a sitting President when the warrant for his arrest was issued by the ICC. His possible prosecution is still being discussed. The Sudanese government has agreed he will stand trial in Hague

Thank you Madam Secretary for tweeting about this. People have been killed. When you became the presidential nominee of your party in 2016 you said when the barrier falls in America, it will fall everywhere. In Nigeria, there are barriers to free speech, protests, quality life.