If Sopulu Dies by Hanging in Philippines, Nigerian govt caused it”

A yet to be identified Nigerian man has narrated the story of Mbaneto Sopuluchukwu, a 22-year-old former NDA student who is now facing a death sentence in the Philippines.

Sopulu was recently paraded alongside another Nigerian Businessman, Azubuike Obiaghanwa Onwigbolu after they were caught with hard drugs worth 125 million naira.

His friend has now taken to social media to explain how Sopulu was a bright student during their secondary school days and had the dreams of joining the Nigerian Army.

He further revealed how Sopulu’s senior colleagues at NDA beat him to a pulp, getting him injured so badly that he could not continue with his dreams of becoming a soldier. 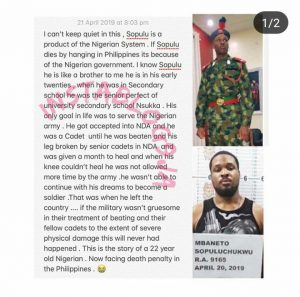 Read what he shared below.

“I know Sopulu he is like a brother to me he is in his early twenties. When he was is secondary school he was the senior prefect of university secondary school Nsukka. His only goal in life was to serve the Nigerian Army. He got accepted into NDA and he was a Cadet until he was beaten and his legs broken by senior Cadets in NDA and was given a month to heal and when his kneel couldn’t heal he was not allowed more time by the Army.

“He was not able to continue with his dream to become a soldier. That was when he left the country… if the military was not gruesome in their treatment of beating their fellow cadets to the extent of severe physical damage, this would never had happened.

“This is the story of a 22 year old Nigerian now facing death penalty in Philippines.”

Check results on your phones not cyber cafes – JAMB advises

Man murders wife for meaning to remarry once he dies