A Nigerian employee at Google, Angel Onuoha has taken to Twitter to recount a racist experience he had at the tech giant’s Mountain View, California head office.

Onuoha, who is Associate Product Manager at Google, said someone called security on him because they did not believe he was an employee there.

He said he was escorted by two security guards until he could verify his identification badge.

The tweet has been retweeted nearly 8,000 times and liked more than 45,000 times since he tweeted it on Monday. 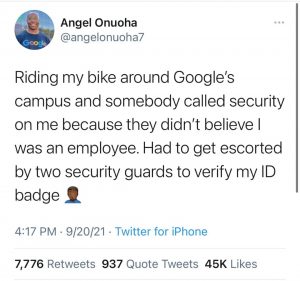 Onuoha is currently a senior at Harvard College studying Economics with a secondary in Psychology and Computer Science.

Reacting to Onuoha’s tweet, former security personnel at Google, Albert Richardson recounted instances when he had security called on him by someone else that thought he did not belong there. 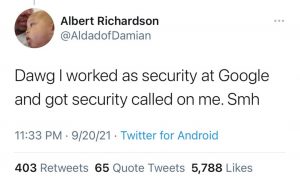 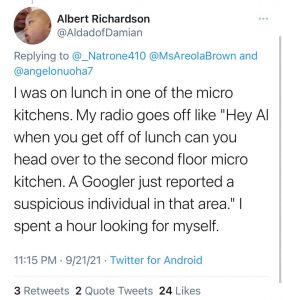 The incidents are not entirely unique, as an ex-employee revealed in a 2019 memo how they “never stopped feeling the burden of being black at Google.”

The ex-employee however identified three steps they thought Google should take to improve its diversity and inclusion efforts.

The steps included restructuring the company’s referral program (which, they said, perpetuated the diversity gap), use virtual reality more prominently in diversity training to build empathy and curtail biases, and offer more mental health support for employees of color.