Cool FM OAP, Daddy Freeze has reacted to General Overseer of the Redeem Christian church of God, Pastor Adeboye’s disclosure that ‘God convinced him that Tithing was right.’

Pastor Adeboye had received heavy backlash after a video which featured him demanding N1bn donation from church members for the development of the church went viral.

In defence to his request, Pastor Adeboye in his 3rd December, 2017 edition of his Daily Devotional, “Open Heavens”, title ‘Tithing is Trusting’, wrote:

“After I became newly born again and we were taught to pay tithes, I laughed and said in my mind, ‘These people do not know that I am a mathematician.

If 100% is not enough for me, how can 90% be enough after I have paid 10% as tithe? Thank you very much! Even though these people are not educated, they still want to use their smartness to take 10% of my income from me. Let them try and take it’.

However, down the line, God convinced me by Himself and I observed remarkable changes in my life.”

Reacting to this, #Freethesheepieleader, Daddy Freeze demanded that the General Overseer of Redeem backs his claim with Biblical quotations.

He stated that Jesus Christ in the Bible never demanded any Tithe from his disciples nor members, hence all Tithe teachings from Pastors were done for their own financial gains rather than the word of God.

See the post as shared:
“All we are saying….is give us scriptures, All we are saying…. is show us bible.
Where did Christ our High priest and the pillar of Christianity, or the disciples, our first pastors and GOs, the founders of the modern church in Christ, collect tithe in the Bible?
–
The peaceful protest continues until answers are provided! ~FRZ
–
#FreeTheSheeple
–
*Jesus questioned the teachers and we his followers MUST ask questions and demand answers!
◄ Luke 2:46 ►
After three days they found him in the temple courts, sitting among the teachers, listening to them and asking them questions.
–
* The Berean Christians were considered ‘noble’ because they crosschecked everything the disciples taught, to make sure it aligned with the Bible, let’s adopt this noble approach!
◄ Acts 17:11 ►
Now the Berean Jews were of more noble character than those in Thessalonica, for they received the message with great eagerness and examined the Scriptures every day to see if what Paul said was true.
–
* God wants us to ‘study’ so we can find ourselves approved, let’s OBEY this instruction!
◄ 2 Timothy 2:15 KJV►
Study to shew thyself approved unto God, a workman that needeth not to be ashamed, rightly dividing the word of truth.” 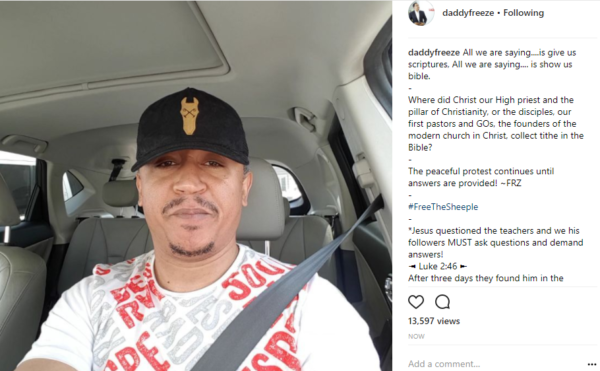 Photos: Paul and Anita Okoye’s dedication of their twins