“Oshiomhole is turning APC into a regional party” Okorocha fumes

The outgoing governor of Imo state, Rochas Okorocha has continued to trade words with the leadership of the All Progressive Congress party, especially with its National Leader, Adams Oshiomhole.

He has stated that if the former Edo Governor remains at the helm of affairs, there is a tendency that the party would lose out in the 2023 elections.

Okorocha insisted that Oshimhole caused the party’s inability to retain governance in some states and take charge of some others.

He further highlighted how unpalatable things would become if politicians from the south keep being marginalized.

Okorocha equally addressed the issue of zoning principal offices to other regions of the country. 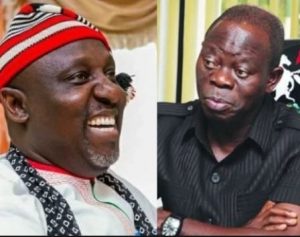 He stated, “I have been watching carefully what is happening in the National Assembly; it is a very interesting drama. But, all I ask of them is that they should consider the South-East in their calculations.

“This nation will not be properly balanced if the South-East is not carried along properly in the affairs of the National Assembly. Nobody seems to be talking about the South-East; it looks like the South-East doesn’t have a place anymore. That is wrong, politically speaking and that will not be good for APC. Because there is going to be a bigger APC after President Muhammadu Buhari must have left the seat.

“My fear now is that APC may have a serious set back in 2023 because the Oshiomhole-led executive is actually turning APC into a regional minority party, which shouldn’t be.  Right now in the whole of South-East, we don’t have an APC governor. So, if there is any discussion in Nigeria now within the APC  governors and President Muhammadu Buhari, there will be nobody from the Sout- East. This is what the APC chairman has done in the South-East.”

The suspended party member equally expressed his distaste over how APC has handled his issues with INEC. He stated that the party seemed unbothered about it.