‘P-Square Is no More, It’s time to Move on’- Peter Okoye

Former member of singing duo P-Square, Peter Okoye has responded to a video of him performing other artistes’ songs at a recent concert in Washington.

The video had drawn heavy criticism and backlash from fans who wondered if he hadn’t broken any copyright laws by performing these songs .

In reaction, the singer said that he only performed songs done by other artists because he was inspired by them and that people are taking it out of context. He added that the P-Square group is no more, and people need to get used to that.

‘Whoever posted that video just re-edited it and didn’t tell y’all I was telling a story of how I got inspired and motivated by some of our Nigerian artistes and the rest of the world. Besides, we have more than 100 songs which I performed and entitled to. We even do this even when I was still in a group in most of our foreign concerts. You can verify that on YouTube. So it’s nothing new. I know it’s because some pple are still sad and mad that Psquare is no more that’s why they want to insult and say whatever. But I understand. Take heart guys, change is constant and I have moved on. 30 children cannot be together for 30 years… so pls get used to it’. 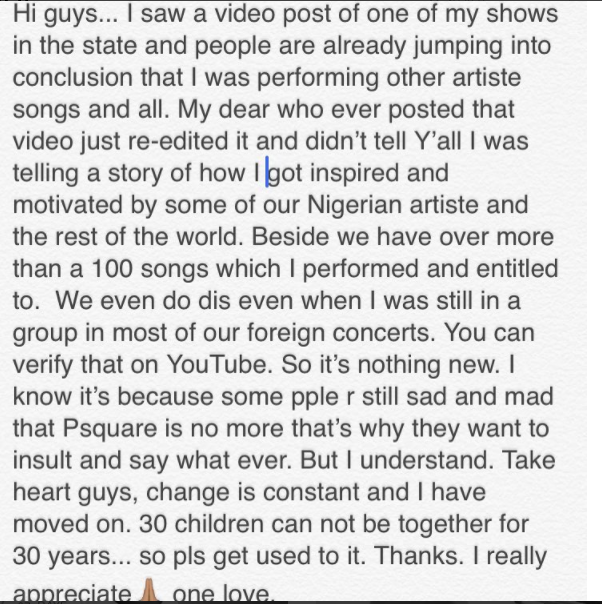