The controversy over alleged forgery of the National Youth Service Corps (NYSC) exemption certificate by Minister of Finance, Kemi Adeosun may not disappear anytime soon.

This is as an allegedly photoshopped photo of the minister in NYSC uniform has rent the social media air. 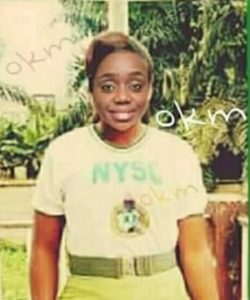 Recall that the controversy broke out after an investigative report by Premium Times.

According to the viral report, the minister graduated from the Polytechnic of East London, United Kingdom as a 22-year-old in 1989 but failed to make herself available for national youth service as required by Nigerian law.

She then allegedly “procured” an NYSC exemption certificate in 2009 on account of age.

Read reactions by Nigerians below:

Femi Falana’s (SAN) NYSC Cert was withheld for 18years until the Oputa panel. Many folks have issues with sorting out their exemption application but to FORGE a Certificate MUST be the height of mischief. Worst still is the delay in the response to the damaging allegation 😞

You don’t need to be a graduate to be a Senator. But if you are a graduate, you must present an NYSC certificate.

The embattledFinance Minister and her Supporters are pushing round poorly photoshopped Picture of her participating in the NYSC scheme.

She submitted a forged NYSC Waiver Certificate and the unintelligent liars are bring a picture where she was serving.

We will see to the end. pic.twitter.com/F2zVropZFl

Madam did her NYSC, says Joe Igbokwe. So, she served and was also exempted? Shokolokobangoshay pic.twitter.com/VtPme38TnR

People who are eligible for NYSC but skip it because it is below them have cheated the rest of us. The ones who now go the extra mile to forge it insult us – do they think we also did not know the way to Oluwole before decided to toil under the rain and sun for fatherland?