The police have arrested four suspected killers of Funke Olakunri who was the daughter of the leader of the pan-Yoruba socio-cultural organization, Afenifere, Chief Reuben Fasoranti.

Force spokesman, Frank Mba, who made this known on Thursday, said the suspects who belong to an eight-man murder gang, have their members spread across the South-West and Edo State.

Police investigations revealed that the killing was carried out by eight fully armed robbery suspects led by one Tambaya (other names unknown), currently at large. 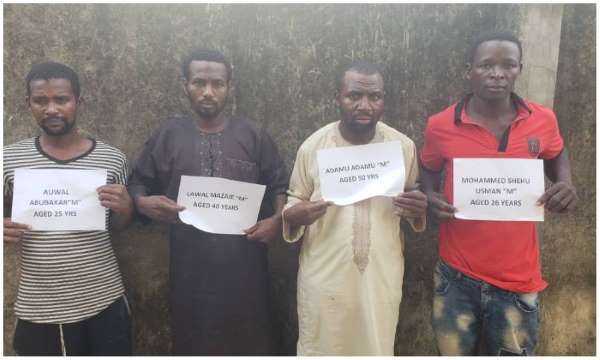 Frank Mba in a statement said: “The arrest of Abubakar led to the arrest of two other members of the gang, Mohammed Usman and Lawal Mazaje in Benin, Edo State, from whom a cache of ammunition was recovered and one other Adamu Adamu in Akure, Ondo State.

“Having established sufficient physical and forensic evidence linking the suspects to the killing of Mrs Funke Olakunrin, the investigators, determined to clear all doubts relating to their findings on 8th April 2020, conducted an identification parade at the Federal SARS headquarters, Lagos which led to the positive and physical identification of Adamu, Mazaje and Usman by a survivor of the earlier crime.

“The survivor gave a clear description of the roles each of the identified suspects played in the killing.

“At this point, the suspects capitulated and voluntarily offered a no-holds-barred confession on how Mrs. Funke Olakunrin was killed. Investigations so far reveal that the operation that led to the killing was carried out by eight fully armed kidnap/robbery suspects led by one Tambaya (other names unknown) who is currently at large.

“While four of the suspects are in custody, an effort is being intensified to arrest the four others still on the run.

“The 8-man gang has its operational base and membership spread in the south-western part of the country and Edo State.

“Consequently the Inspector General of Police, hereby, declares the principal suspect, Tambaya (other names unknown) wanted for his involvement in the death of Mrs. Funke Olakunrin.”