Police decry stoning of its officers by IPOB

Police officers attached to the Anambra State Police Command have raised an alarm over the level of aggression shown towards them by members of the proscribed group, IPOB.

The Biafrans are said to have resorted into stoning police officers who were assigned on the mission to remove Biafra flags that were hung at different places around the state by supporters of the group.

While reacting to the attacks in a statement, the command explained that there had been flags and insignia flying around the cities with instructions that everyone should obey the May 30 sit-at-home directive given by the group.

Hence, some police teams were dispatched to quickly calm the tension already building up and clear the streets of such illegal calls. 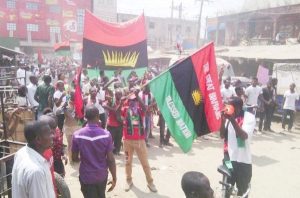 However, the police officers were attacked with stones and catapults. As a result, many of the officers sustained injuries.

The statement further indicated that reinforcements had to be called in to contain the situation and a good number of the offenders have been caught.

“There was a report that the Indigenous People of Biafra came out in large number moving around with dangerous weapons and at the same time hoisting flags of the proscribed group on poles and billboards. Following the report, police operatives rushed to the scene in order to prevent them from mounting the flags but they engaged the police with catapults and stones.

“However, 12 suspects were arrested and over 50 flags with different inscriptions of IPOB/MASSOB and Biafran Independent movements recovered as exhibits. There was another intelligence report that some misguided elements suspected to be IPOB Members were sighted at various locations mounting Biafra flags along Ekwulobia -Uga Road in Aguata LGA of Anambra State.

“Police patrol teams pursued them and arrested 12 suspects while others escaped,  72 Biafran flags and items with Biafra inscriptions were recovered,” the statement read in part.

Another gun factory uncovered in Benue