Former governor of Lagos State, Babatunde Raji Fashola has bemoaned Nigerians who have been shaming the current administration for borrowing all the time to carry out projects.

The current Minister of Power, Works, and Housing expressed his distaste for such comments when he was speaking with some reporters in Kwara state, recently.

Fashola stated that whoever feels the government was not being reasonable by applying for loans should bring forward an alternative if there was any.

He said, “Those who say we shouldn’t borrow must have an alternative answer to where we will get the money. Those who don’t support borrowing, are they ready to support increased taxes?” 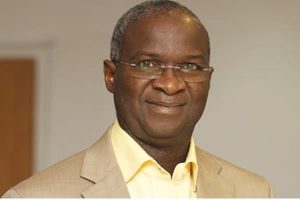 The Minister further explained that the main reason construction activities on some federal roads have been stalling is due to the unavailability of funds, adding that the Federal was left with no other option than to borrow money and complete all ongoing projects in the country.

He progressed, “Where do we get the money,?” Fashola queried. “It is not from President Muhammadu Buhari’s salary or the National Assembly’s salary; we are talking about quantifiable, substantial billions of naira that need to be spent to pay. That is how you move money around the economy because once you pay the contractors, they order sand, cement, iron rods. They don’t keep all those things. Where the money stops, supply stops”.

Fashola subsequently reiterated that the Federal Government was committed to ensuring the wellbeing of Nigerians and putting the proper infrastructure in place would make that possible.