Barcelona and Brazil legend, Ronaldinho Gaucho, has released a song to kick-start his rap music career.

The two-time FIFA world best collaborated with another Brazilian music artiste, Jorge Vercillo in the song which hammered on the menace of corruption in the country.

In a video shared online, Ronaldinho, who wore a white top and black beret, can be seen rapping to the song and playing drums, to showcase his musical talents.

At a point, he rapped, “Love is our game, from start to finish, in my heart there are no longer enemies.” 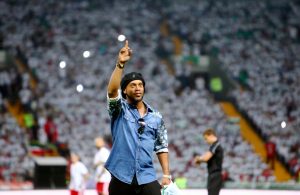 Ronaldinho further sang that an armor wielding saint should terminate the dragon of greed.

The chorus of the song condemned mismanagement of public funds at the expense of “schools and hospitals” in the country.

Before now, Ronaldinho has been sighted at different musical programs. In Tunisia, the retired footballer sang alongside Tunisian rapper, K2rhym. He was equally featured in the 2018 official World Cup theme song that was performed by Nicky Jam, Will Smith, and Era Istrefi.

Again, during the closing ceremony of the world cup in Moscow, he played drums.

However, Ronaldinho has had his own share of controversy. He had his passport withheld in 2018 after he allegedly refused to pay an environmental damage fine of $2.3 million.

Half of cyberattacks during Russian election came from U.S. – Russian embassy