Singer Runtown has been embroiled in a scandal which involved the head of the record label, Eric Many, Dilly Umenyiora

The Label boss was arrested by police on suspicion of attempting to murder Runtown and threatening him with a gun.

Runtown took to Twitter to react saying that Umenyiora was acting like a child and that he was the one holding the record label down when it was struggling.

He also added that he was owing the record label nothing. 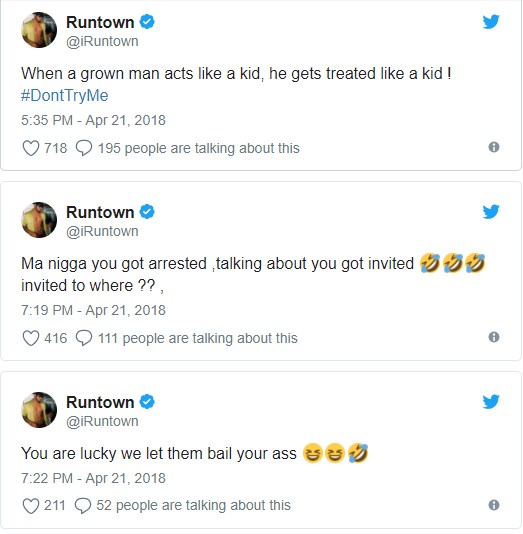 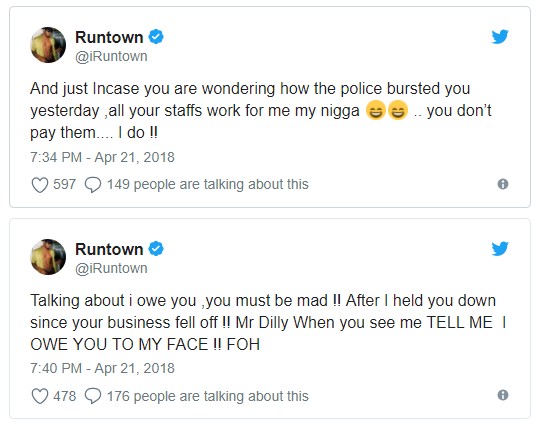 Meanwhile Eric Many has released a statement following the arrest and release of the label boss.

The statement reads: “On Friday 20th April, the Nigerian Police acting on a report by estranged Eric Many act, Runtown escorted record label owner, Dilly Umenyiora to their office for questioning following a report of a threat to life.

He was questioned, dropped his statement on claims by Runtown that his life was threatened which was found out to be false and Okwudili Umenyiora immediately returned home.

This is not the first time Runtown has accused his label boss of pulling a gun on him. In 2016, he pulled the same stunt and he’s repeating it again to create cheap publicity.

Every time the record label takes legal actions through a law court against Runtown through injunction for severe damages to the label, Runtown results to cheap stunts and bringing up issues like threat to life with a gun which is totally false.

This doesn’t take away the fact that there’s a Federal High Court Injunction against Runtown and as at the last court sitting on April 16th, he expected the case to be dismissed but it didn’t happen. That’s why he resorted to blackmail.

The label maintains that there was never a threat to Runtown’s life directly by Dilly Umenyiora or anyone affiliated to the label as explained to the Nigerian Police. Eric Many LTD since this case began has been civil and remain to civil by following through with the court injunction and never resort to violence or blackmail.”