Salah to the Rescue as Liverpool Grab Slender Win Against Brighton

Mohamed Salah’s goal was the only difference in Liverpool’s match against Brighton on Saturday. The current league leaders hardly produced clear cut chances throughout the Premier League fixture as the home team sat deep into their half in a bid to block Liverpool from creating chances.

Liverpool tried to create chances through Roberto Firmino and Xherdan Shaqiri in the first half but in the end, both teams were unable to test their opponent’s keeper. 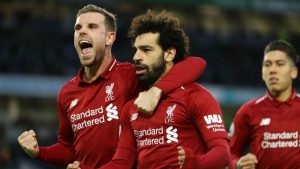 After the break, Liverpool increased their pace and tried to crack the Brighton defense. Soon enough, Pascal Gross’ tackle got on the wrong side of Salah’s superb footwork. He took him down inside the box, forcing the referee to blow for a foul.

The Egyptian then got up to convert the penalty kick himself.

The win was far from a convincing one, considering Liverpool’s recent form in the league. However, they are now seven points ahead of second-placed Manchester City who still have a game in hand.