Many  protesters ended up being dead while about 200 were locked behind bars yesterday after a protest went awry in Zimbabwe. The protests had begun immediately the Zimbabwean government increased fuel price in a bit to manage the country’s devastating economic crisis.

Police then swung to action and tried to ensure that the protests did not get off hands. Eventually, they had to shoot tear gas in Harare, the country’s capital. It became necessary as the protesters had begun to burn tires and barricade roads, disturbing the peace of the area while they sang derogatory songs against President Emmerson Mnangagwa.

Zimbabwe’s security minister, Owen Ncube, confirmed that some of the protesters died at the end of the day, and accused members of the opposition party and some political rights bodies for stirring up the protests.

He said, “Regrettably, this has resulted in the loss of life and property, including injury to police officers and members of the public. Full investigations are underway,” 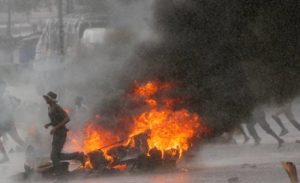 The Human Rights Forum reported that about five people were shot, The Movement for Democratic Change reported that protesters tried to burn its headquarters in Harare but the fire was timely put out.

The airline company, Fastjet had to terminate its flight’s scheduled to and from Zimbabwe.

The protest turned riot forced businesses to close early while parents were called to pick their children before the close of school hours. Zimbabwe’s primary labour union has insisted that the country goes on a three-day strike, starting from Monday. This forced those who defied the order to walk home as there were no public transports available.

A resident affected by the strike action, Leeroy Kabanga, spoke with Reuters to explain his displeasure about the way things are in his area.

He said, “I am stranded in town now and I have no idea how I am going to go home,” resident Leeroy Kabanga told Reuters.

Meanwhile, Zimbabwe’s president, who happens to be on a trip to five different countries, has maintained his stand on the increase in fuel price. While explaining the reasons for the increment to reporters, Mnangagwa said, “Zimbabwe is going through both political and economic reforms and these do not come easily. It will take time for things to settle and results to be shown.”

He also maintained that Zimbabwe’s fuel prices were the lowest in the region.

5 Diseases and Infections You Can Get from Kissing