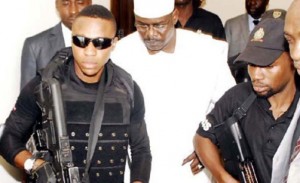 Senator Mohammed Ali Ndume has said that the Nigerian Air force merely committed an operational blunder when it dropped bombs over his convoy in Borno last week. However the Air Force has said that it made no such mistake.

Ndume said, “If I had died, they would have cooked up stories and probably say that I was killed while meeting with Boko Haram insurgents.

“Initially, I thought it was Boko Haram that planted the bombs on the Highway, targeting me because there were people waving at us by the roadside.

“We thought the boys were the ones detonating the bombs until a military personnel in our convoy told us that the bombs were coming from the Air Force aircraft. We then ran.

“The statement credited to the Air Force spokesman was unfortunate. Immediately the incident happened nobody could reach me on phone.

“There was panic in Maiduguri and Borno but the Pulka people were able to communicate with them.

“So many people, including my wife, thought I was dead. The attack was to me, a professional blunder.

“I am surprised that some people will allege that I will lie about what happened. My case was not the first in a series of professional blunders committed by the military in the fight against insurgency.

“I thank God the incident happened in Pulka and there were witnesses. They saw the aircraft, unless they are trying to tell us that it is not a Nigerian Air Force aircraft.

“Four bombs were dropped by the fighter jet, we picked the four shells. I have one in my house in Maiduguri; I only didn’t bring it because I came by air.

“The people of Pulka collected the remaining three shells and pleaded with me that they want to keep it for record purposes. So where did I get the shells?

“I showed it to reporters in Maiduguri; so, how can somebody say nothing happened? Except they are telling us that a foreign fighter jet came into Nigerian air space and dropped four bombs on the convoy of a Nigerian senator.”

However NAF spokesman said, “The attention of the Nigerian Air Force has been drawn to reports in some media houses which allegedly said its aircraft targeted and bombed Senator Ali Ndume’s convoy on Saturday, 11  January,  2014.

“The reports  misquoted the  Director of  Information as  having said the fighter jets mistakenly fired on the senator’s convoy. For the  avoidance of doubt, NAF aircraft did not target Senator Ndume’s convoy as alleged.”

Buhari to Service Chiefs: I hope your best will be good enough for Nigeria