The street of Nigerian social media is witnessing a new drama as Media Personality Shade Ladipo slams her colleague Toke Makinwa for advising her followers not to film their acts of charity.

The drama began when Toke in a Twitter post, admonished people who are giving to the less privileged to do so in secrecy.

She said the good-doers should protect the dignity of the recipients of their charitable acts by not posting their faces on social media.

“Here’s an appeal not shade, not a call out either, I salute everyone who’s giving out to the less privileged this season, you are not the government and your kindness will be rewarded by God but can we stop filming the recipients of your benevolence?

“You can film your acts of kindness for yourselves, your archive or documentation purposes, etc. pls blur out the faces of those receiving them cos they didn’t ask to be seen on camera and you can protect their dignity.

However, Shade Ladipo seized the moment to remind Toke how she posted pictures of her PA whom she gifted a car in 2019. Toke posted a video of her PA’s shocking reaction when she saw her gift.

“No Shade.. But you filmed your whole giving your PA a car which actually inspired me to give my PA a laptop (We serve different Gods)

“In this new world, documenting your benevolence IMO does more good than bad but honestly it irks me when I see it as well…again No Shade” 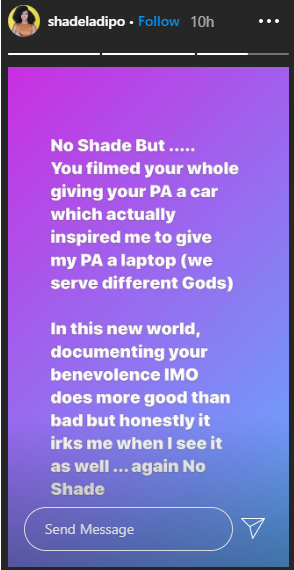 Here is a video of Toke Makinwa giving her PA a car in 2019.

ALSO READ: Stop Ranting! We are safe – Funke Akindele’s husband fires back at Critics after hosting House Party amid Lockdown

This has attracted hilarious reactions from Internet users;

Toke scored an own goal 😁

She may not have thought of it in the past. However have realised it now…it doesn’t make her a hypocrite. But someone who has repented. All this internet never forgets is crap mehn

Social media never forgets…..this one went to goan dig the video from Abis😂

She Might Have Changed But Then Internet Never Forget….Let’s Our Celebrities Learn To Practice What They Preach🙄🙄

Celebrities ask eachother not to video while giving when they are broke. Once they have money! Boom! Even to give themselves a plate of rice, they will video the chicken and cabbage leaf at the center of the plate