A recently released World Bank report says no fewer than 4 out of 10 Nigerians are living below the poverty line. Since depression is known to be a travelling partner of poverty and as telecom service providers make cheaper data subscription options available, many Nigerians are taking to watching online comedy skits and stalking their favourite social media influencers online to take their minds off their own gloomy financial situation.

As their target market continues to grow, these content creators appear to be swimming in cash and many of them regularly flaunt flashy lifestyles – buying expensive automobiles, migrating into posh neighborhoods (Lekki, Lagos being the preferred choice), spending lavishly at chic nightclubs, and going on vacations to eye-popping destinations.

However, many eyebrows have been raised over the source of their “sudden” wealth, especially as many of their compatriots are in a never-ending battle with poverty.

In fact, so suspicious have people become of content creators’ wealth that the males are routinely derisively tagged ‘Yahoo boys’ (internet fraudsters) and hard drug peddlers and the females ‘oloshos’ (prostitutes), among other uncomplimentary sobriquets.

Controversial Nollywood actor and social critic, Uche Maduagwu also took to Instagram to air his opinion on the source of wealth of his colleagues in the entertainment industry.

Although not in the same line as those in the skit making business, it is indeed a noteworthy mention.

“God bless our wealthy Naija men. They have been donating luxury mansions to our actresses since 1901. U are more spiritual than physical if u understand this post.” 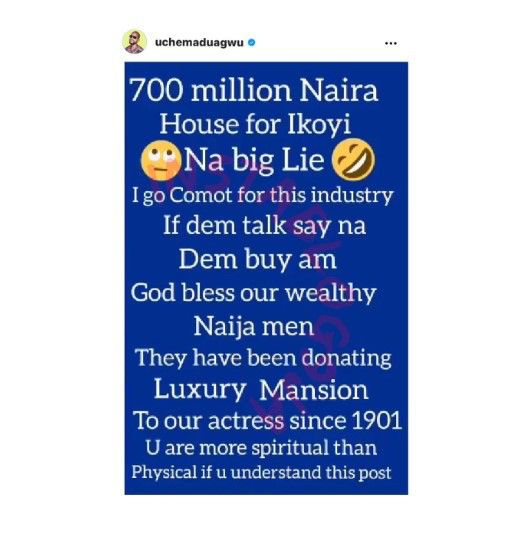 Similarly, Nigerian sports journalist and broadcaster, Bolarinwa Olajide questioned the financial capability of skit-makers to purchase the mansions they show off online.

He took to Twitter to ask whether property owners and estate developers in Lekki, Lagos have started selling houses as cheap as N1 million.

His comment was made around the time three comediennes and skit makers Amarachi, Sir Balo and Twinz Love flaunted their newly acquired mansions online. 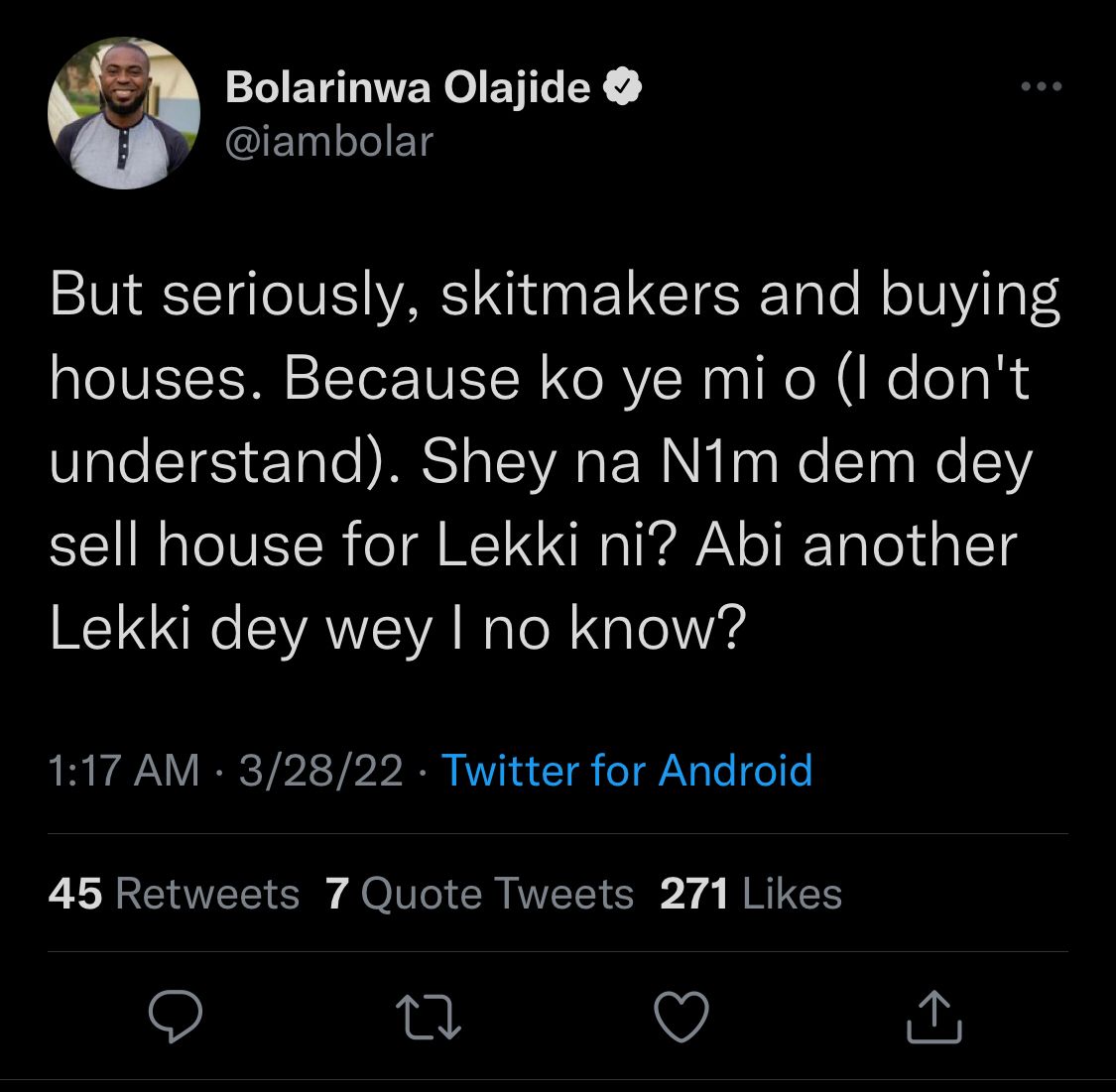 Recall this was the same energy and public opprobrium Linda Ikeji received almost a decade ago when she purchased her Banana Island mansion, followed by a Bentley.

We covered that story here (link).

The Herald has once again investigated the allegations being levelled against social media influencers and skit makers, and it seems many of these Instagram, TikTok, Facebook, YouTube and Twitter savvy social media professionals are simply laughing to the bank based on their work ethic, large following and ability to command some of the highest advertisement rates in the internet marketing game.

For instance, we gathered the rate cards of 4 popular social media influencers and skit makers, and our calculations give these allegations zero potency.

Lasisi Elenu, whose real name is Nosa Afolabi, is one of the most recognised faces in the comedy skit space. He commands nearly 9 million followers across four social media platforms – Facebook, Twitter, Instagram and TikTok. For clarity, the comedian has 1.74 million followers on Facebook, 4 million on Instagram, 1.2 million on Twitter, 145,000 on YouTube and 308,000 on TikTok. One revenue stream for a creator of his standing is Instagram. According to Search Engine Journal, a content creator with 1 million followers in America generates an average of $670 for an Instagram post. As a result of the obvious differences between the American and Nigerian online markets, a creator in Nigeria would generate a third of this sum per post, amounting to $223 (approximately N127,000 at N570/$1). If the creator manages to average a post every two days, he is assured of N1.9 million monthly revenue and N22.8 million annually. While this may not be enough to buy a Lekki home, things become interesting when other revenue streams are taken into consideration. The major revenue stream for a Nigerian online content creator is sponsored posts. Lasisi Elenu charges N1.5 million for one creative video for products and brands, N500,000 for a flyer post, and N500,000 for a video creative repost on Instagram. As Lasisi is one of the most engaged creators in Nigeria, we estimated his earning from these cluster to be in excess of N5 million a month, taking into account an average of two creative videos for products/brands, 2 flyer posts and 2 creative reposts across the social media platforms. In a year, that is a cool N60 million. Lasisi is equally one of the most sought after creatives in the country who gets regularly event invites, which justifies his N2.5 million rate for MC/Compere duties and N1.5 million for event appearance. With one apiece every month, that’s collectively N4 million monthly and N48 million annually.

Without prejudice to other revenue streams which this newspaper may not be privy to, we conservatively estimate that Lasisi Elenu rakes in N130 million annually.

Another balling personality in the online content creation space in Nigeria is Debo Adedayo, aka Mr Macaroni. This notable philanthropist recently revealed that he is a Lekki landlord, although he is known to reside in the highbrow Magodo area of the Lagos mainland. How did Mr Macaroni make the money to acquire a Lekki property and embark on his constant giveaways running into millions on social media, you might ask? We’ll attempt to provide an insight in this piece. Mr Macaroni charges a daily fee of N1 million to feature a client’s photo or video post on his Instagram timeline boasting 2.6 million followers, N1.5 million for a week and N2 million for permanent placement. A featured post on his Instagram story costs a client N300,000 and N500,000 when Facebook is thrown into the mix. To conceptualise and execute content for a client costs N2 million, or N2.5 million, if posting on his YouTube only is involved. It rises to N2.7 million if he is posting on Facebook alone and N2.8 million if he is posting on Instagram alone. Posting such content on these three major channels together costs N3 million. After perusal of Mr Macaroni’s social media handles, we conservatively estimated a revenue inflow of between N100 million to N150 million annually.

Ikekhua Anthonia, better known as Ajiianje, is a popular influencer on TikTok with 816,000 followers on the video sharing platform. Although not as influential as the previous two, she still commands above average fees for her services. For instance, the popular TikToker charges clients $800 (approximately N350,000) for one video post, $1,700 (N800,000) for two weeks promotion, and $2,700 (N1.5 million) for one-month promotion. Her Instagram rates are a tad lower though, as she charges N200,000 per page post, N20,000 per story post with an option of three story posts for N50,000. Furthermore, Ajiianje charges N200,000 per IG TV post, and N100,000 for a 30-min Instagram Live session. The influencer, who has 177,000 followers on Instagram, charges N500,000 for a two-week promotion and double for a one-month gig. After careful check of her TikTok and Instagram pages, Ajiianje;s yearly earnings from social media influencing could range from N40 million to N60 million.

Josh 2 Funny, whose real name is Josh Alfred, is a comedian who shot to limelight when he created the #DontLeaveMe challenge that went viral across the globe. Since finding fame, the actor and stand-up comic has consistently improved on his craft to become one of the most versatile in the industry. And his rates reflect the popular saying that ‘hardwork pays’. When working with international brands, Josh 2 Funny, who has 2 million followers on Instagram, charges $6,000 (N3,000,000) for a video skit on his IG timeline, and $8,000 (N4,000,000) if the same skits his posted across his social media platforms. If a client is submitting a photo of video to be shared on the content creator’s IG timeline, they must be willing to cough out $2,000 (N1,000,000) and $3,000 (N1,500,000) for cross-platform posting. When working with SMEs, Josh 2 Funny’s rates range from N750,000 to N2 million, depending on the type of content and platform. For music promotion, the content creator’s rates range from N750,000 to N3 million. A cursory look at the comedian’s social media handles shows he easily rakes in between N50 million and N90 million annually.

So, next time you notice influx of your favourite online content creators into Lekki neighborhoods and Mercedes Benz dealerships, remember that these guys are ‘chopping money!’

2023 Elections: You Owe Your Country A Duty To Register And Vote – Pastor Adeboye Tells RCCG Members