Faith Oboh, 22, is the third in a family of 12 persons; the first daughter in a polygamous family who lost her mother before he finished with her secondary school’s education.

Oboh is among the more than 200 returnees from Libya who had to undergo documentation organised by the Edo Anti-Human Trafficked and Illegal Migration team.

Any perspective observer in the venue of the event would not require a seer to imagine the seriousness of the thought she had in that mood; looking as if her world had collapsed.

Her appearance looked as someone who has been cast out without any chance to succeed in life and deep in her thought was uncertainty and, somewhat, bleak future.

Saying some words unwillingly, she took courage to recall that she was a hair stylist but extreme poverty informed her decision to go through the desert of Libya in December, 2016 to seek “fortune’’ elsewhere.

“From the proceeds I made from hair braiding in Nigeria, I paid N500, 000 to someone who introduced me and facilitated the journey to Libya.

“My ultimate goal was to get to Italy by crossing the Mediterranean Sea but the unexpected event occurred; the engine of the boat conveying us developed fault amid the high sea and we got stranded for more than 12 hours.

“Men and women, including children occupant of the boat, became prayer warriors amid tears with the wave becoming stronger and more dangerous before the captain of the boat called the Libyan police for rescue.

“We later ended up in the camp to face hostility from Libyans; I went through a horrifying experience within the one year I spent in that country.

Stating another bitter experience, Ms Blessing Braimah, a 34-year old mother of four, said she left a thriving petty business and her children for “plum job’’ promise in a foreign country.

Braimah said she borrowed N600, 000 to embark on the journey thinking the trip would turn around the life of her family.

She alleged that her husband estranged her with the children, the condition that tempted her to seek help beyond Nigerian shores.

“It was a horrible experience in Libya because the place is like a war zone where you never can tell what will happen to you in the next minute,’’ she said.

Braima said she and others were put in a prison in Tripoli, saying, “it was a terrible experience; from the journey through the desert, the sound of guns everywhere, to living terrible life at the camp.

“I would have been home before now, but it is not a journey you embark on like that; you just don’t go to the park and say you are coming home to Nigeria.’’

For Osaze Imafidon, another returnee, his life would never remain the same as his journey to Libya has left him with a disability — walking with the support of crutches.

Imafidon said he sustained a gunshot injury that led to the amputation of one of his legs, insisting that, “I was shot at not because I am a criminal, but it’s the normal way of life in Libya where people openly display guns.

“It’s no longer seen as illegal; you can be shot at any time with the slightest of provocation by the locals.

“No life of any black person means anything to them; they come into your apartment at will and cart away your belongings and if you dare raise your voice, you will be lucky to be alive.’’ 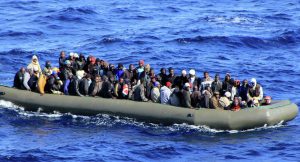 Migrants preparing to cross to Europe through the Mediterranean Sea

In the light of this, Mr Solomon Okoduwa, Senior Special Assistant to Gov. Godwin Obaseki on Anti-Human Trafficking and Illegal Migration says the gruesome expressions of the returnees from Libya raise concerns.

Okoduwa regretted that illegal migration to other countries by Nigerians to seek “greener pasture’’ had taken lives of number of youths, especially from Edo.

He blamed parents and guardians, accusing them of a deliberate encouragement, which in most cases, force their children and wards to undertake such trips.

According to him, this has become a cultural problem in Edo, where it is now a norm that if you don’t have your ward abroad, you are missing out.

“This is why these parents go to the length of even selling their property, in some cases, houses, just to see their children travel to Europe.

“Again, some of these parents seek the support and collaboration of traffickers well known to them to assist their children in travelling out,’’ he observed.

Okoduwa, therefore, called for action to be taken by the Federal Government, international agencies and other relevant stakeholders, to address the challenge.

He, nonetheless, said in a bid to stop the practice, the state committee on Anti-Human Trafficking and Illegal Migration Anti Human trafficking, had begun campaigns to discourage the public against illegal migration.

“We want parents and guardians to encourage their wards to stay back home here and also let them know that there is dignity in labour, if they join hands to run their little businesses together, they can go places.

“We also let them know that Europe is not a bed of roses and that majority of them are being deceived by promising them of Europe tours.

“People are making it here in Benin and they too can make it only if they believe; they should also support the good work the governor is doing and join hands with him to move the state forward,’’ he said.

The governor’s aide noted that the campaign to churches and other public places was to further amplify the ills associated with illegal migration.

Similarly, the state Attorney-General and Commissioner for Justice, Prof. Yinka Omoregbe, said the state government had determined to tackle human trafficking and irregular migration in the state.

“We want our people going abroad to do so responsibly and not going there to suffer or go through horrifying experience.

“The major pre-occupation of the government now is to reintegrate the returnees; 150 of them had already been trained on various skill acquisition programmes.

“The governor has approved the N100 million seed grant and 150 hectares of land as the returnees’ starter’s pack on farming.

“They will also be trained on various aspects of trade such as welding and fabrication, shoe making, catering, events management and paint making, among others.

“It is an ongoing process that will go round to all those who make themselves available for the programmes,’’ she said.

She also explained that 600 of the returnees had started receiving N20, 000 monthly as stipends from the government which would last for only three months.

“Dedication to policies and programmes of empowerment, employment and reintegration of returnees, are part of state government’s attempt to mitigate the root cause of illegal migration.

“But there ought to be a stronger partnership between the state and the Federal Government on progammes aimed at solving the challenges that the returnees pose in the state,’’ she said.

She also observed that the state governor recently expressed concern on the operations of National Agency for the Prohibition of Trafficking in Persons (NAPTIP) in the evacuation and reintegration of victims of human trafficking.

Corroborating her claim, Mr Crusoe Osagie, Special Adviser to the governor on Media, alleged that NAPTIP and other agencies charged to cater for victims of human trafficking had not been forthcoming as expected.

He noted that NAPTIP ought to have advised government on the need to provide transport fare for those being airlifted to the country so that they would not be stranded on arriving in the Nigeria.

According to Edo government, the state is developing a new tripartite arrangement with oil companies, the state government and host communities to encourage corporate social responsibility programmes.

He said this would replace the conventional bilateral model and create a better, valuable investor-community relationship and effective service delivery to communities.(NANFeatures)