The embattled rapper, Tekashi 6ix9ine, has pleaded guilty to a total of nine crimes. This is coming after he decided to take a plea deal last week.

The crimes he pleaded guilty to include conspiracy, narcotics trafficking, racketeering, illegal possession of firearms, among others.  Tekashi whose name is Daniel Hernandez also pleaded guilty to misconducts which lead to a traffic stop last May.

Back in 2015, he was given probation after he was featured in a pedophilic video involving an underage girl and another male adult.

Tekashi equally confessed that in the fall of 2017, he became a member of a gang known as the Nine Trey Blood Gang and he participated in the gang’s attempt to murder a rival in March 2018.

During the confession before Judge Paul A Engelmayer,  the 22 years old American said,  “I did this to maintain or increase my own standing in Nine Trey. I knew that another member of Nine Trey had a gun and discharged that gun”. 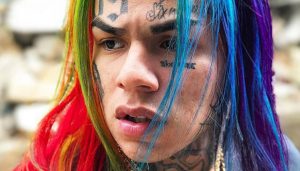 He disclosed that he also took part in robbing people at gunpoint because it was required that new gang members commit two crimes at the least in order to fulfill their pledges.

Tekashi  later said that last year, he “paid a person to shoot at a rival member of Nine Trey to

He concluded by saying, “I apologize to the court, to anyone who was hurt, to my family, friends, and fans for what I have done and who I have let down.”

The Guardian UK reported that if Tekashi confesses all his crimes, the judge may be lenient in his ruling and ignore the standard punishment of 47 years imprisonment for all his crimes.

APC Plotting To Smuggle Almajiris From Niger, Chad To Vote For Buhari – Fani-Kayode