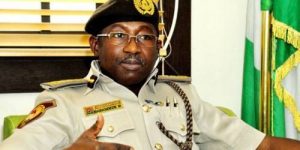 The Nigeria Immigration Service (NIS) has issued a notice of caution about the proliferation  that a lot of“fake marriages’’ are taking place in the country.

Mr Muhammad Babandede, Comptroller General of the Agency disclosed this development on Wednesday in Abuja that male foreigners were often complicit  in the act.According to the Immigration boss   the aim  of the marital racket was to cheat on the conditions for the issuance of residence and work permits to foreigners by the agency.

“We have observed that foreigners, especially men, are trying to beat the system of issuance of residence permits.”

“A lot of fake or `arrangee’ marriages are going on, and that would give them permission to stay in this country without much liabilities.”

“The advantage is that when you are the spouse of a Nigerian, you have no limitation on the job you will do; you don’t have to pay residence permit fees; it is easier for you to stay.” said the Immigration boss whose agency the NIS had apprehended some suspects alleged to be part of  a false marriage racket syndicate.

 It was gathered that strategies were being put in place to curb the issue from becoming one of national insecurity.

Some strategies employed by the agency include compulsory  six months stay in Nigeria after marriage before an applicant can get residence permit and restricting foreign spouses to jobs for which Nigerians lacked the requisite skills and qualifications among others.