Frank Lampard’s wait for his first win as Chelsea manager continues after  Sunday’s 1-1 draw with Leicester. Last week Chelsea suffered a huge defeat to Manchester united in Lampard’s first Premier League game as the Blue’s manager. Here are three things we learned from an enthralling and entertaining afternoon at the Bridge.

His criticism of Mount in particular – mild though it was – baffled many onlookers, not least Frank Lampard who, when asked about it in his post-match press conference responded: “He didn’t like the performance of Mason Mount? Is that what he said? Did he? Wow.”

One week on and Mourinho must surely have been impressed by what he saw from Mount against Leicester. 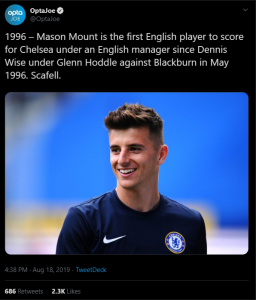 The 20-year-old academy graduate was full of pressing, dribbling and technical quality in his senior Stamford Bridge debut and took his seventh-minute goal excellently after picking Wilfred Ndidi’s pocket on the edge of the Leicester box.

And how fitting it was that the first home goal of the Lampard era was scored by a young player repaying his manager’s faith.

There will no doubt be plenty more where that one came from.

2. Playing out from the back is admirable but perilous 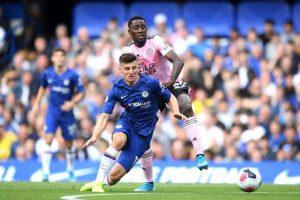 Pep Guardiola was repeatedly told during his first season in the Premier League that passing out from the back would never work in English football.

But three years down the line, Manchester City have got it down to a fine art and it seems every team in the top flight is trying to emulate Guardiola’s philosophy.

Leicester found out the hard way in this game that it isn’t as easy as it looks, however.

To do it well, you need two technically gifted centre-backs and a defensive midfielder with eyes in the back of his head. It also takes a hell of a lot of practice.

Whether Ndidi didn’t get a shout or was just too slow to react to Mount haring up behind him, it was an incredibly poor and totally avoidable error.

Sometimes, there’s nothing wrong with keeping it simple and putting your foot through the ball.

But the Nigerian at least redeemed himself by bagging the equaliser later in the game.

3. Leicester would be kicking themselves 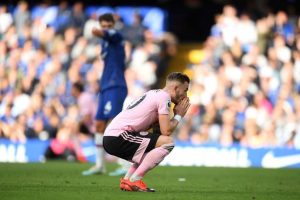 This was a game of two halves. Chelsea was hand-down the better side the better team in the first half but the second half saw the Foxes raise the game, dictate the tempo, and eventually, a villain turned hero. Indeed Roger’s men deserve their equaliser. they pressed high up the pitch and were adventurous creating one opportunity after the other. The goal was coming really. They totally dominated proceedings.

At 1-1, James Maddison and Jamie Vardy both missed golden opportunities to score while Youri Tielemans was uncharacteristically wasteful in possession.

The stats say both sides shared the possession 50/50 and Chelsea had five shots on target to Leicester’s three, but it’s Brendan Rodgers who will probably be the more disappointed of the two managers when all is said and done.

Not the result Lampard wanted but he can take some positives from the result. Maybe now he can really begin to feel his confidence grow. The faith he had placed in his starlets may yet be repaired in gold. There’s plenty yet to come from Chelsea’s relatively young side.

Galaxy Note 10 and 10 Plus, next level mobile computing