Tunde Alabi,  a Nollywood actor who featured in the TV series the village Headmaster, is critically ill  at Lagos General  Hospital,  with one of his leg set for amputation  in order to save his life.

Mr Alabi, who is currently dependent on his colleagues  for survival,  has no home, money or close help. He is on the verge of been evicted from the hospital  because  he can no longer sustain  his continuous stay there. 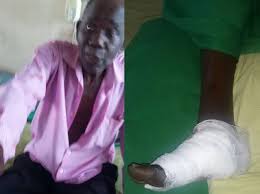 The veteran actor who has been battling diabetes for years with no treatment because of financial  constraints,  reached out to people through Mr Paul Julius, a movie director to help save his life.

Speaking about the veteran actor, Mr Paul Julius said “If there’s a better word to use in place of veteran, then that should come for this old war horse in the world of make -believe. Uncle Tunde Alabi, has been on the acting scene since the glorious days of television drama in Nigeria, and he ‘s today one of the last of that octopus called The Village Headmaster, a television drama that was in-thing in its days on National Television.

Foreign Based Super Eagle Players to Finance their trip

Double Suicide attempt: Mum and daughter attempt to jump In front of train