Elon Musk, Twitter’s new owner, had promised to release the Twitter Files in order to uphold the principle of transparency.

The files were intended to provide insight into what happened at Twitter prior to Musk’s acquisition of the company.

They were created specifically to disseminate information about Twitter’s election interference. 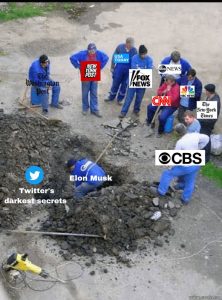 American journalist, Matt Taibbi’s first installment of Twitter Files reveals just that. In the run-up to the 2020 elections, Democrats would send Twitter emails with links to tweets that were anti-Democratic Party, and Twitter would respond with “we’ll handle them.”

In this context, “handling” meant suppressing those tweets, deleting them, or deleting the account that wrote those tweets. Democrats are avoiding and downplaying the story.

It is critical to understand what the Twitter Files reveal: just before the 2020 elections, an American political party colluded with an American social media firm to suppress information that was detrimental to the political party’s interests.

For example, information about the actions of the president candidate’s son, which indicate that he was using his relationship with his father to sell access.

Hunter Biden has long been vilified by the American right and the Republican Party for alleged wrongdoing in Ukraine. The New York Post published a report titled “Biden’s Secret Emails: Ukrainian exec thanked Hunter Biden for ‘opportunity to meet’ veep dad” in October 2020, three weeks before the 2020 US Presidential election.

Hunter Biden was accused of peddling influence with Ukrainian businessmen in the report, which also included a 12-minute “raunchy video” of Hunter.

Following the publication of the story, Twitter prohibited anyone from tweeting a link to it or sending it via direct message, labeling it “hacked material.” The New York Post‘s account was also suspended for several days, preventing it from tweeting further.

According to Republicans, preventing the spread of this news story may have influenced the 2020 election results.

All of this information is now public due to Elon Musk’s decision to release internal documents and Twitter communication.

1. A new #TwitterFiles investigation reveals that teams of Twitter employees build blacklists, prevent disfavored tweets from trending, and actively limit the visibility of entire accounts or even trending topics—all in secret, without informing users.

Her main claim is that “teams of Twitter employees build blacklists, prevent disfavored tweets from trending, and actively limit the visibility of entire accounts or even trending topics—all in secret, without informing users”.

Conservatives have increased their criticism of the tech behemoth since the thread went viral on Twitter, while liberal commentators have largely dismissed the revelations as “nothing new.”

Visibility Filtering (VF) includes, among other things, blocking searches about a specific user/post, limiting the scope of a tweet’s discoverability, and preventing certain users from trending or appearing in hashtag searches.

All of this is allegedly done without providing the affected user with any information or context. As a result, a specific user’s reach on Twitterverse is severely limited unless they are officially and openly banned.

Weiss claims that VF was used to silence conservative Twitter users. Weiss cites Stanford’s Dr. Jay Bhattacharya, who has repeatedly expressed concern about the effects of long-term lockdowns on children’s health and learning. Weiss claimed Twitter secretly put him on a “Trends Blacklist,” preventing his tweets from trending.

Weiss also cited the case of popular right-wing talk show host Dan Bongino, who was once subjected to a “search blocklist.” Weiss tweeted, quoting an unnamed Twitter engineer, “We control visibility quite a bit.” And we have a lot of say over the amplification of your content. And ordinary people have no idea how much we do.”

According to Weiss, “the group that decided whether to limit the reach of certain users was the Strategic Response Team – Global Escalation Team, or SRT-GET.” It routinely handled up to 200 cases per day.” However, the most politically sensitive decisions were made at a higher, unofficial level.

Weiss tweeted, “There existed a level beyond official ticketing, beyond the rank-and-file moderators following the company’s policy on paper. That is the “Site Integrity Policy, Policy Escalation Support,” known as SIP-PES. This secret group included the Head of Legal, Policy, and Trust (Vijaya Gadde), the Global Head of Trust & Safety (Yoel Roth), subsequent CEOs Jack Dorsey and Parag Agrawal, and others.”

According to Weiss’ revelations, a few top executives were effectively making major content moderation decisions without adhering to Twitter’s own standard procedures. Weiss shared an alleged direct message sent by Twitter’s Global Head of Trust & Safety Yoel Roth, in which he asked for more research on “non-removal policy interventions like disabling engagements and deamplification/visibility filtering.”

File 3 detailed the events that led up to former US President Donald Trump’s ‘deplatforming’ from Twitter.

The third set of documents focuses on interactions between former Twitter executives and federal agencies that resulted in Donald Trump’s removal from the platform.

Twitter permanently suspended former US President Donald Trump’s account in January 2021 due to the risk of further incitement of violence.

The author of the first installment of Twitter Files, Matt Taibbi, has revealed details about the events leading up to the ban. Taibbi shared screenshots of internal Twitter communications from Slack.

Taibbi claims that, regardless of how users felt about Trump’s actions, what happened on Twitter throughout the process is historically significant.

He claims that Twitter executives had close relationships with federal agencies and were actively moderating content at their request. He claims, for example, that on October 8, 2020, executives opened a channel called “us2020 xfn enforcement” to discuss the removal of election-related content and high-profile accounts.

Taibbi also claimed that Twitter’s moderation process relied on “guesses, gut instincts, even Google searches, even in cases involving the President,” referring to the group of Twitter executives as a “high-speed Supreme Court of moderation.”

He also points out that no requests for moderation were received from the Trump campaign, the Trump White House, or Republicans.

According to the documents, Yoel Roth, the former head of Trust and Safety, met with central agencies such as the FBI on a weekly basis. Screenshots from Taibbi’s conversations show Roth ghosting some of these FBI meetings.