The UEFA Champions League draw for the round of 16 matches has just been conducted. The event took place in Nyon, Switzerland, and while teams like FC Barcelona and Manchester City would relatively have it easy with their opponents, teams like Liverpool, Manchester United, Atletico Madrid will have to face tougher opponents to earn their place in the quarterfinals of the competition. 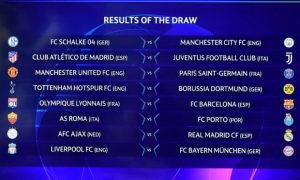 Leaders of each group from the group stages will first play away from home when the competition resumes in February before they head back to their home soil to play the return legs.

Facts from the Round of 16 Draw

Tottenham defeated Dortmund 3-1 at home and 2-1 at the group stage, last season.

Lyon has not defeated Barcelona in their last six meetings. Barcelona won four and drew two.

Bayern and Liverpool have not met in a competition since the 2001 UEFA Super Cup competition in Monaco. Liverpool won the match by 3 goals to 2.

Real Madrid have scored 20 goals in their last six games against Ajax.

In their last nine matches against Italian oppositions, Atletico have either won or drawn.

Nigerian Democracy: Between Rule Of Law And Will Of Man By Jerome-Mario Utomi