US Treasury Bond Auctions for Dummies

How do US treasury auctions work and why is it important to understand them as a trader?

How do US treasury auctions work and why is it important to understand them as a trader?

According to information on the US Treasury’s homepage, the auction process can be broken down into 4 parts.

Announcement of the auction

To know when an auction will take place, you can:

Four times a year, the Department of the Treasury holds a press conference to discuss Treasury marketable security auctions. This usually happens on the first Wednesday in February, May, August, and November. At each of these press conferences, tentative auction schedules for the next six months are given.

During a press conference, Treasury may also announce other decisions relating to the auction schedule or Treasury marketable securities in general. The Treasury Department’s website has information on the quarterly press.

Governments regularly borrow money to fund their operations and to do this, they issue ‘debt’ called treasuries. The global bond market is worth about $120 trillion worldwide and $46 trillion in the US, according to Securities Industry and Financial Markets Association (SIFMA). This market dwarfs all other markets; it is, therefore, important to understand some of its inner workings because it affects all other markets.

Understanding the outcomes of US treasury auctions helps us as traders, retail or institutional, gauge risk on-risk off, gauge an outlook for interest rates and it helps us find trades in bonds and currency markets. It is a known fact that currencies trade toward treasury yields so forex traders can add this to their arsenal.

The US Treasury may be funding a new debt or a refunding of previous debt. Many of the participants in these auctions are members of competing central banks like the ECB, PBC and BOJ. To utilize this information as a trader, you do not need to know whether it is a new supply or a resupply, focus should be on the numbers the auction traded at. These auctions are called ‘Dutch’ auctions because participants do not know details of the bids coming in until the bidding process is completed, unlike regular auctions.

How an auction work

In the mockup above there are 4 bidders. The first bidder offers the full $100 million and asks to be paid back with an interest of 2%. The other bidders below also put their offers into their envelopes and pass it forward discreetly. One must recall that the US Treasury is looking for the best deal for themselves; that is the cheapest debt possible because they’ll be able to finance their debt at the lowest rate possible. Therefore the most attractive bid in the mockup above is the bid for 0.5% interest, making it the High Yield (HY) because it was the highest yield that was accepted by the treasury department. Once the High Yield is ‘locked in’ this is the interest that will be paid on maturity of the bond once the coupon is issued, be it 2Y, 5Y, 10Y or 30Y.

The High Yield is lower than the When Issued in this auction thus there was a good demand. Bonds should RALLY after this auction due to the high demand and the drop in the yield. Keep in mind that Yields and Bond prices have a negative (inverse) correlation.

Also note that there was a 25bp (Basis Point) stop through in the auction. We calculate this by subtracting the High Yield from the When Issued;

Some of the knock-on effects of this demand for bonds will include; dropping interest rates, bad data, elevated risk (risk off). In the case of elevated risk, there may be higher risk in the markets so investors are willing to accept poor interest rates for the ‘safety’ of bonds. When we see a lot of demand coming into the 3Y treasury bills for example we can assume it may be a flight to safety by the large institutions in a risk off environment.

The example above is rather extreme as it usually takes multiple fractional bids combined to raise the full issue.

In a fractionalized auction the bid with the highest interest offer gets the high yield and every other bid gets the high yield regardless of what they bid, as long as the full issue has been raised. This is done to encourage competitiveness among bidders in the auctions. Imagine if you were a bidder and you had offered 0.5% but still ended getting 2%, you would probably be smiling to the bank. Remember; anyone can bid at these auctions so long as they have the capacity to do so.

The bid to cover ratio in this more practical example is 1:1 because there is $100 million worth of bids for $100 million dollars-worth of bonds.

In this case, due to the poor demand we expect a drop in the price of Bonds.

Hence we had a tailing auction of 125bp, which was a pretty poor auction.

There is another scenario where after all the bid envelopes have been opened and the bond issue has not been fully raised, that is, the number of bids are not up to the amount the US Treasury is trying to raise.

In this case, the Treasury is looking to raise $100 million but the bids, after being counted, amounted to only $67 million. There is basically no ‘demand’ for this bond, but there is a process in place that solves this problem.

There is a group called the ‘Primary Dealers’. These dealers have to take up the remainder of the issue at the high yield. These primary dealers, big banks like Band of America, JP Morgan, Goldman Sachs and the like, step into the auction and they are obliged, by law, to pick up the remainder of the issue. In this case, they would have to take up the remaining $33 million of bonds at the high yield, which is 2% in this case, just like every other bidder in this auction. These dealers have ‘perks’ and preferential access to the US Treasury for being primary dealers, so it is not pro bono.

After the auctions are finished, the results are posted on the US Treasury’s website, treasurydirect.gov, where you can access it. Find the navigation route to recent auction results below. 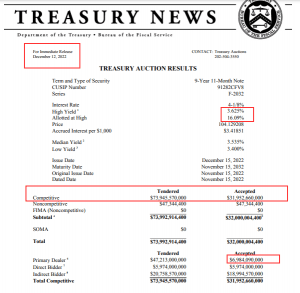 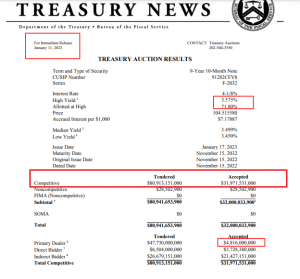 If you trade bonds then looking for possible buy opportunities in 10Y notes could be in your plans. If you trade forex then the uptick in demand for 10Y notes could alert you to a possible risk off sentiment in the markets so you can look for possible short positions in equities and some currencies such as the Australian Dollar and the Canadian Dollar. If you notice a massive demand on 2Y auctions, for example, you may investigate further to see if the demand for short-term government debt is tied risk issues in the market and you then trade accordingly.

Writer, Innovation Enthusiast and Student of the Capital Markets

US govt speaks on preferred candidate for Nigeria’s presidential election

Converting crypto: How to exchange Litecoin for another crypto?