Vanessa Bryant took to social media to share a powerful message about the protests that have erupted in the country following the murder of George Floyd.

Amid nationwide unrest over the death of George Floyd, Vanessa Bryant shared a photo of her late husband Kobe wearing an “I Can’t Breathe” T-shirt.

Her Instagram post included a reminder that life is short and unpredictable with a picture of Kobe Bryant wearing the T-shirt.

Kobe Bryant had first worn the T-shirt in 2014 to protest against the death of Eric Garner.

Eric Garner, an African-American man who died in police custody. “I can’t breathe” Garner had said after a policeman placed his arm around his neck.

Vanessa Bryant wrote: “My husband wore this shirt years ago and yet here we are again. Life is so fragile. Life is so unpredictable. Life is too short. Let’s share and embrace the beautiful qualities and similarities we all share as people. Drive out hate. Teach respect and love for all at home and school. Spread LOVE. Fight for change — register to VOTE. Do not use innocent lives lost an excuse to loot. BE AN EXAMPLE OF THE CHANGE WE WANT TO SEE. #BLACKLIVESMATTER.” 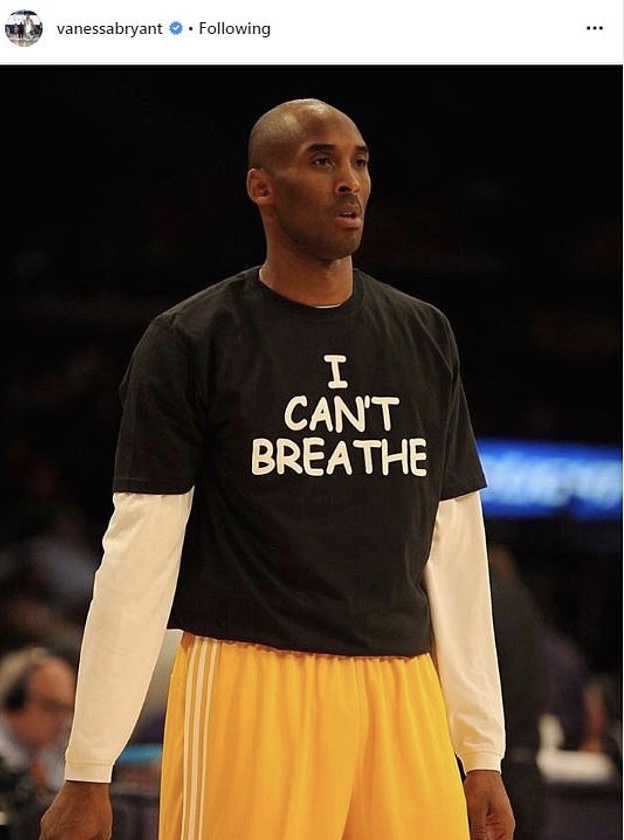 She continued with another post that encourages people to start important conversations to dismantle racism within themselves and in their own homes.

George Floyd: A Worldview of Race – By Kingsely Moghalu