Vendor dies from electrocution after trying to assist another victim

A yet to be identified food vendor has lost her life due to electrocution in Umuhia, Abia State.  The mishap reportedly occurred around the Michael Okpara Square in the state’s capital on Thursday.

Reports have it that the vendor had initially steered clear of the incident scene but had to return to rescue a sales assistant who works with her.

A high tension wire had landed on a stick which was close to the roof of the food vendor’s station, causing the entire area to be prone to electric shock. 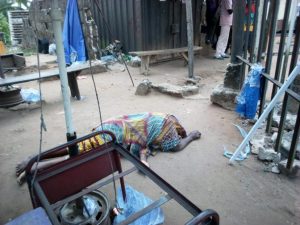 Unknowingly, the sales assistant later placed her hand on the pole holding the wire and got electrocuted in the process.

However, she survived the shock and beckoned for rescue. Her colleague was not so lucky. In her attempt to rescue her, she got electrocuted and died before she got to the hospital.

According to Southern City news, the other victim is still receiving medical treatments at a certain hospital in the area while the Police officers around there have been notified about the incident.