Video: Panic as occupant gets trapped after building collapse

On Wednesday, a 3-storey building collapsed around Old Express in Aba, Abia State, killing one person while another was trapped inside the rubble.

The sudden collapse is said to have been the second incident recorded in that particular area as another 3-storey building had earlier collapsed as a result of heavy rainfall in the different parts of the state.

Eye witnesses complained that the building along Old express which already claimed one life had been consistently flooded whenever it rained. Due to this, the foundation of the building must have been weakened and that must have led to the collapse. However, the second 3 storey building that collapsed is said to have been built with inferior materials. 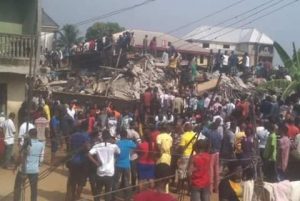 According to reports, one of the residents trapped inside the rubble had to call his relations to alert them of the incidence. Rescue operations have now been launched in the area.

Others who were close to the building at the time of the incidence sustained minor injuries and have been rushed to the hospital for treatment.

Some of the workers at Park road at the time of the incident were said to have sustained minor injuries but have been taken to hospitals where they were receiving medical attention.

See a clip from the scene below.

We intend to make Ondo better than Edo – INEC boss