Liverpool: “We haven’t reached our full potential yet”

To say Trent Alexander Arnold was instrumental to Liverpool Champions League title-winning race last season would be an understatement.

Liverpool “go again” with a UCL opener with Napoli on Tuesday. Drawn in the same group as Salzburg and Genk in Group E would seem like an easy group for the Champions. 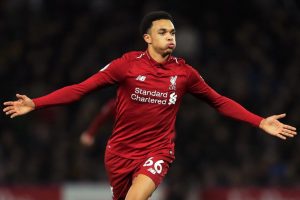 Alexander-Arnold underlined the empowering effect of the stadium and the recent shift in mentality that has made the Reds such a force at home and in Europe.

“I remember playing Manchester City at home,” said the No.66. “We couldn’t speak – you can’t communicate on the pitch. You’re trying to tell someone to block a space or tell them they’ve got a man on them and they can’t hear you shout.

“I think the atmospheres we get in the Champions League games are probably the best in the competition. It’s a fortress at Anfield now, getting back to how it was in the old days.

“It’s where the club belongs: being in finals, two [Champions League] finals in a row, coming close in the league, challenging for trophies.

“With the world-class players we’ve got, we shouldn’t ever shy away from the fact that we’re good enough as individuals and as a team to be challenging for trophies, if not multiple trophies, every season.”

Arsenal: I apologised to the team – Sokratis

Didier Drogba, Wife Call It Quits After 20 Years Together