“We will declare Niger Delta Republic on June 1” – Militants

A group of Niger Delta militants has threatened to declare the region as being a sovereign republic, come June 1.

In the statement which was released by its Director of Information, Maxwell Dan, the militants stated that the reason for the move was as a result of the continuous maltreatment being face by citizens from the region under the current administration.

As part of their claims of injustice, the house invasion carried out on Chief Edwin Clark’s residence and Walter Onnoghen’s suspension and trials were highlighted in the statement. 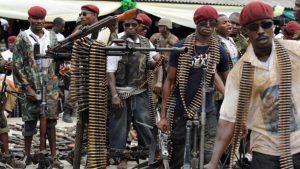 “It is a common fact that Nigeria has completely derailed from the path of peace, justice, and progress as proclaimed by its founding fathers.

“As that could not pay off, they remove a Niger Delta son, Mr. Mathew Seiyeifa, the most qualified Director of DSS without any due process. Not satisfied with his cruel and selective onslaught against the Niger Delta people, they plotted again and remove our son  Justice Walter Onnoghen from office on frivolous allegations without following due process, neither was he given an opportunity of fair hearing.

“It is also unfortunate that after four years of this administration, there is no single viable project executed by the Federal Government in  Niger Delta despite the billions of naira accrued to the government from the resources of the Niger Delta as a result of the ceasefire in the region.”