A seventy years old grandmother and four of her grandchildren have lost their lives at the Biagbini area of Ese Odo Local Government in Ondo State.

The four individuals were said to be indoor when fire gutted their apartment and got them burnt in the end.

Neighbors, who were unable to put out the fire on time, gave the name of the victims as Moyo Jide (grandmother), Gbana, Wisdom, Jennifer, Wisdom, and Big Daddy – all within ages three and nine.

According to reports, the death of one of Moyo Jide’s son, some years back, forced two of the kids to relocate to the riverine area and stay with their grandmother.

According to one of the residents, the fire would most likely have originated from the deceased’s kitchen as there was no electricity. Besides, the community’s main medium of cooking was wood-burning stoves (firewood). 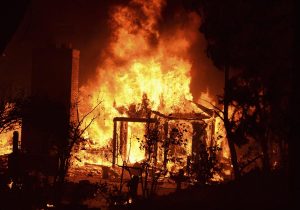 The resident said, “Everybody in the community was awake in the middle of the night when the fire started but there was nothing we could do to rescue the victims. Everything in the house was destroyed.

“We are yet to know the cause of the fire but we suspect it could be cooking fire that was not properly put out in the kitchen that caused the inferno because we use firewood here and there is no electricity in the community.”

He further explained that the Police Division closest to the area was contacted and the bodies of the five victims have been evacuated and taken to a hospital.

Confirming the incidence, a Police Public Relations Officer, Femi Joseph, stated, “We are yet to ascertain the cause of the fire incident but we have commenced our investigation into it.”