BY all standards, the legal battle line is being drawn by The Commonwealth
Liberation Party, TCLP, a registered political party in the queen’s
enclave, United Kingdom, UK, as their headquarters in London puts up a
final plan to drag any pilot who for ‘any given reason’ by British
Immigration deport Nigerians back home, being that such process under any
guise is a clear breach of Article 9, 13 & 15 of Universal Declaration of
Human Rights 1948. 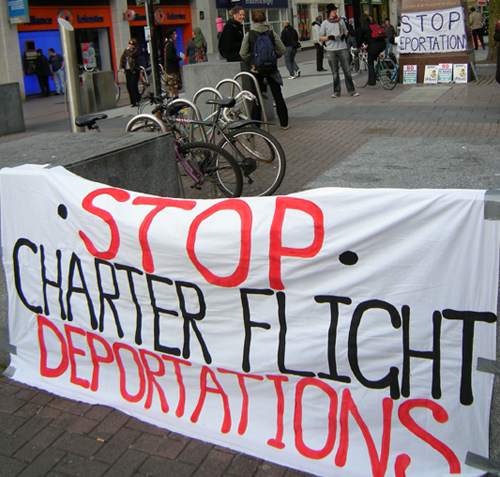 “Commonwealth High Commissions in UK must not, should not and cannot
participate with UK Immigration on Deportation bills regarding their
citizens, a failure in this regard becomes a Confederalism crime.

Alexia explained that stern warning had been issued by TCLP to 51 member
nations of Commonwealth never to parley British Immigration in issuing
deportation certificates to its citizens. She said: “We are happy that
Nigerian High Commission in UK is standing firm in this regard that
British Immigration has no right to deport Nigerians. We are also happy
that other member nations of Commonwealth have adopted our International
Bill of Patriot Mandate, IBOPM, to stop the incessant harassment and
deportation of Commonwealth citizens resident all over UK. Our acclaimed
Patriot bill is a refusal to accept Deported Migrants from UK. We are
aware of sinister plans being made by UK government to continually deport
Nigerians, other Commonwealth citizens, later revoke their resident status
and British passports after some years; the Rule of law is no respecter of
any persons. Our Commonwealth Protectorate Police Service Commission that
protects members of Commonwealth citizens in UK are trained British police
officers (retired) who are already taken notes on various human right
abuses committed by British Immigration against Nigerians and other
Commonwealth members. We are monitoring closely and waiting to see any
pilot that will convey Nigerians or any other Commonwealth nation members
back home; by then such pilot must be ready for a long drawn legal battle
and litigation that will begin in the Magistrate Courts of those
Commonwealth nations and eventually ends in World Court in Hague,
Netherlands. We are fully ready for this legal battle.

She added furiously: “No certificate of deportation must be issued by any
Commonwealth High Commission in UK to the British Immigration to deport
any Nigerian, Liberian, Ugandan, Jamaican or any other members of
Commonwealth nations; if they engage in this illegality, there will be
facing uprising, massive movement and unending legal battle. It is a legal
battle of intellectualism, ideas, nobility, divinity and mythology that
supersedes any other battle because an injury to one is an injury to all.
For certain, victory is assured, since no one ever wins a battle against
the peoples’ movement. Enough is enough.”

Schools in Edo to Remain Closed till Feb. 1 – Obaseki